The third instalment in a gripping and atmospheric crime series set on a small island where there is no escape . . . 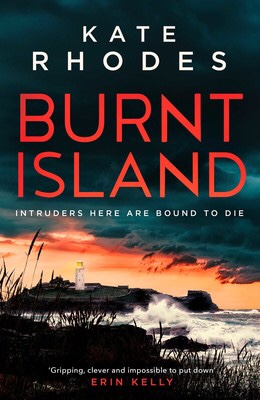 INTRUDERS HERE ARE BOUND TO DIE . . .

As the sun sets on a cold November evening, the tiny community of St Agnes prepares for their annual Fifth-of-November festivities. Moments before the fireworks are scheduled to commence, an islander discovers a charred body left on the bonfire, and quickly it becomes clear that a killer is at large.

Ben Kitto is the Deputy Chief of Police for the Scilly Isles, and with a killer on the loose, he has no choice but to forbid all residents from leaving the island. With a population of just eighty people, everyone is a suspect and no one is safe.

When threats start appearing, written in the old Cornish language, Ben suspects that the killer’s motive is to rid the island of the newcomers who threaten their traditions. With time running out, Ben hurries to discover the secrets of the island’s peculiar residents, but he knows it’s only a matter of time before another fire is started . . .

No place to run.

No place to hide.

Anyone who reads this blog or follows me on Twitter will know that I have loved the Hell Bay Series. Burnt Island is the third book and, possibly, the last of the Series which makes me rather sad as now there will be no more DI Ben Kitto or Shadow, his dog, to read about.

The Series has provided some terrific stories set on the Scilly Isles and Burnt Island is no exception. The books are so descriptive and atmospheric that you are immediately transported to this small group of islands off the south coast of England. The way in which Kate Rhodes writes not only brings the setting alive but also the people, the characters and you live the story along with Ben.

Chapter One has the Islanders preparing for the annual firework display and Ben is on St Agnes and Gugh to ensure the safety of the event. Eddie, his newly promoted Sergeant, is there too. It’s Bens Birthday and he is surprised with two gifts as he is on his way to thank the St John’s ambulance and marshal volunteers. The first from his godmother, Nancy, who gives him her fathers vintage Rolex. The second is the return of his best friend Zoe who has been chasing her dreams teaching music in Mumbai. Just as he and all those gathered are expecting the start of the fireworks – traditionally a flare set off from Burnt Island – Steve Tregarron comes rushing to him. Steve was on Burnt Island to set off the flare when he discovered something that Ben really needs to see. Bens birthday isn’t going to end as well as he had hoped.

Ben goes with Steve and finds a body. It is badly burnt.

And so begins another amazing story and the investigation will send Ben looking at all the inhabitants of the island. This is a gripping, twisty tale with plenty of suspects, lot’s of tension and a wonderful cast of characters each of whom make this book even more delightful to read. Yes, I know it a murder mystery and anyone of them might be the murderer but they make the story so believable. Once again the setting and atmosphere are beautifully drawn. This is a book you will want to sit and read all at once and then you will be devastated to have finished it so quickly. It’s a book well worth reading and I would most certainly highly recommend it.

Indeed do read all the books in the Hell Bay Series if you haven’t already because they are excellent. It is no surprise and well deserved, in my opinion, that Hell Bay was Long-listed for the Theakston Old Peculier Crime Novel of the Year 2019.

All thoughts are my own, I have not received any payment for the review of this book.

I have never met Kate in person however our paths have crossed on Twitter. I have loved the Hell Bay Series and done a little to champion her books when possible. I was really chuffed to see that Kate has very kindly added my name, amongst others, to her list of acknowledgements with the following note:-

Finally, thanks to Twitter pals…… Your kind messages of encouragement inspire me to produce the best stories I can dream up, to keep you all entertained.

Thank you, Kate from a truly entertained and thrilled reader.

This has become my sixth read for the #20BooksofSummer challenge. Not originally on my list as it was my intention to buy the paperback but when I realised Burnt Island was coming out as an eBook on 19th June I couldn’t resist. I’ll still get the paperback as I have the others and want the complete series.

Kate Rhodes is an acclaimed crime novelist and an award-winning poet. She lives in Cambridge with her husband, the writer and film-maker, Dave Pescod. She visited the Scilly Isles every year as a child which gave her the idea for this new series. She is one of the founders of the Killer Women writing group.

Kate will, along with Isobel Ashdown, be running the Creative Thursday Just Bloody Write session at the Theakston Crime Festival this coming July.