Posted on March 27, 2019 by lovebooksreadbooks 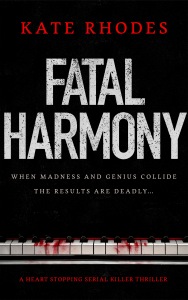 Adrian Stone believes he is a genius. A narcissist, with a psychotic desire to pursue his ambition to become the world’s most revered pianist, Stone joined London’s Royal College of Music as a child prodigy, believing hispath to fame was secure. But when his parents decided to send him back to school, he slaughtered them and hisolder sister in their Richmond home, landing himself in Rampton’s high security unit.

Nine years later Stone escapes with two goals in mind: to kill those who denied his destiny and pursue his musical ambitions.

As bodies start to appear around London Dr Alice Quentin is brought in from the Met’s Forensic Psychology Unit. But when she realises her name is on Stone’s list of potential victims, the case becomes personal.

Working alongside her boyfriend, DI Don Burns, London’s most successful murder investigator, Alice must stop Stone to save her own life.

Alice realises that there is logic to the music left at each murder scene, and thinks she’s cracked the case, but little does she know what Stone has in store for his grand finale…

The first time I read anything from Kate Rhodes was when I read Hell Bay and have very much enjoyed all of that series so far. When I was sent some information from Heather at Bloodhound Books about Fatal Harmony it seemed quite fortuitous as I knew the author had written another series of books. This is the fifth in the series. I recently read the first one (and have others in the series awaiting my attention) and thought it would be interesting to see what was now happening in the world of Dr Alice Quentin. Well things have moved on! Alice is now Deputy Director of the Met’s Forensic Psychology Unit and very much a part of the investigation into finding Adrian Stone when he escapes custody, killing two officers and seriously injuring a third. A master of disguise he eludes the investigating team who are frantically searching seemingly always one step behind.

It was also good to catch up with some of the other characters her brother, Will, best friend, Lola, and Don Burns their situations have moved on quite some way from Crosbones Yard the first in the series, as you would expect, and reading Fatal Harmony certainly makes me want to go back and read the journey they have all taken since then.

Back to Fatal Harmony though, this is after all a blog blitz about Kate Rhodes latest book and newest in the Alice Quentin Series. As always in her writing the author has a great sense of place and this exudes throughout the book giving the reader not only terrific descriptive information of London but some absolutely fascinating detail of various music venues and places around the Capital all put to excellent use to link the story together. Kate Rhodes certainly knows how to write a captivating, heart-rendering and intricate story of a psychotic murderer out for revenge and to show the world what a great talent he is. The way in which Rhodes writes the main character, Alice, allowing her to be sympathetic without being too naive and still showing that she is human – even if it’s not easy for her to demonstrate it in her personal life – is quite a triumph; the way in which the author gets to the very heart of what she wants to say in a few words must be due to her initially being a poet cutting straight to the heart of the matter, allowing the reader to understand some quite complicated ideas, feelings and actions so incisively, so clearly without a jarring in the overall story of the chase to catch a killer who will not stop taking revenge until he is caught.

We are allowed into the thinking of Adrian as the story progresses, his desperate need to perform and be acknowledged as a great musician and his manipulative ability when it comes to vulnerable people who might further his cause in one way or another. It is easy to believe how people might well be drawn under the influence of such a man, the way in which he is able to find their weak spots and use them for his own betterment without a thought for them. He is smart, capable – having built up a deal of knowledge – and has  carefully planned what he wants to do.

We follow Alice as she brings disparate musical clues together as she hunts for Adrian in the only way she knows and, to some extent, against the flow of the main investigation taking place under Ron Burns and his wonderful team. The team are not only investigating but trying to protect those most likely targets for Adrian’s revenge such as his sister, Melissa, and not least Alice herself. As the body count rises and then a very prominent pianist goes missing time is of the essence. This is a truly gripping story.

Fatal Harmony is an excellent read, one which I would highly recommend. This can most certainly be read as a stand-alone but I am sure that you, like me, will want to go back and read the rest of what is obviously a first-class series. I also can’t wait to read the next in the series as much to find out what is going to happen with Alice, Ron and the rest of the team as for whatever fiendish crime story these terrific characters will have to deal with.

With thanks to Heather at Bloodhound Books for the invite onto the Blog Tour and for an eCopy of Fatal Harmony by Kate Rhodes.

I would also like to thanks to Kate Rhodes, although I have never met her in person, our paths have crossed on Twitter. I have loved the Hell Bay Series and done a little to champion her books when possible. It was lovely to see that Kate has very kindly added my name to her list of acknowledgements in Fatal Harmony.

Like to see more? Then do take a look at what everyone’s saying… Fatal Harmony is currently an absolute snip at 99p

Kate was born in London and tried many jobs before starting to write. She spent time as a cocktail waitress, a theatre usherette, and more recently as an English teacher before writing two prize-winning collections of poetry. Her crime novels have been translated into ten different languages, and have received high acclaim from the press. The Guardian described her books as ‘beautifully written and expertly plotted, a masterclass in crime fiction.’ Her Hell Bay series set in the Isles of Scilly has been optioned for TV.

Other Books by Kate Rhodes