When DI Tessa Marsden is called to a road traffic accident, she is disturbed by the crime scene she must investigate. She now has a double murder to contend with; two dead girls from the same village.

Realising the murders aren’t linked, Marsden summons the help of the Connection Investigation Agency, run by Kat (a church Deacon), Beth (known as Mouse) who is a computer expert and Doris (Beth’s feisty grandmother).

When it is discovered that one of the murdered girls is pregnant the case takes an unexpected turn.

Meanwhile, the agency has been asked to track down the long lost sone of Ewan Barker. Will Kat, Mouse and Doris find him and reunite him with his father?

This is the third book in the series which has at its heart a friendship between Kat, Beth (aka mouse) and Doris. They are not only friends but also have a PI agency.

D I Tessa Marsden has become another strong character in the books and someone who the friends have come to respect, support and enjoy the company of and this works both ways.

There are two investigations – the two murders under investigation by D I Marsden and that of a man, Ewan Barker, who asks the Agency to find his long lost son.

It is interesting to compare the two types of investigation – that of the police procedural versus that of a private investigator – how each can work in their own realms and can also be of help to each other without the competitive atmosphere often found in crime fiction.

The main characters are charming, believable and well written by Anita Waller. The plotting is easy to read with plenty to keep the reader guessing in both threads. Whilst I see why this may be considered a ‘cosy’ mystery there is an edge to the plot lines which gives it a bit of a gritty feel at times.

Anita Waller handles some quite dark scenarios with a lightness of touch, a little humour, strong female characters and empathy. The plotting is well done. It will be a shame if this really is the last in the series of Kat and Mouse books as there seems to be still more that the books could bring to the reader both with the characters and new storylines.

I can certainly recommend Murder Unearthed indeed all of the Kat and Mouse Series (so far!).

My thanks to Bloodhound Books for an eCopy of Murder Unearthed and to Heather at Bloodhound for the invite to this delightful Blog Blitz. Like to read more? Here’s the full tour…. 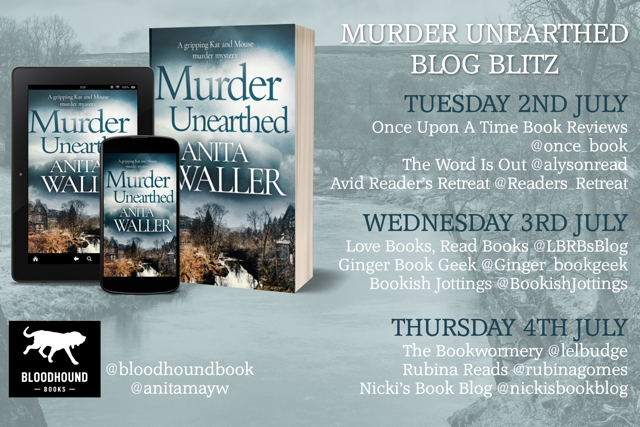 Murder Unearthed is available in paperback and as an eBook

Anita was born in Sheffield, South Yorkshire and has lived all her life there. She has three adult children and seven grandchildren ranging in age from 9 months to 21 years. Anita and Dave have been married almost 49 years!

She wrote Beautiful in 1985 and had it accepted for publication. They were the contract stage when the publishing house went into liquidation.

Like many another book it ended up in the loft until two years ago when she resurrected it, retyped all 100,000 words (it was orginally written on an Amstrad 8256 and all she had was a hard copy!) and sent it off to Bloodhound Books.

She is now retired from my life of being a Patchwork Tutor and HGV driver’s wife and concentrates on patchwork for the pleasure of it and writing. She started writing at around the age of 8 – she clearly remembers writing ‘novels’ at that age which were actually short stories split into chapters!

Anita’s genre is murder – but murder with a good reason behind it!