Death Of An Angel – The Danny Bird Mysteries by Derek Farrell 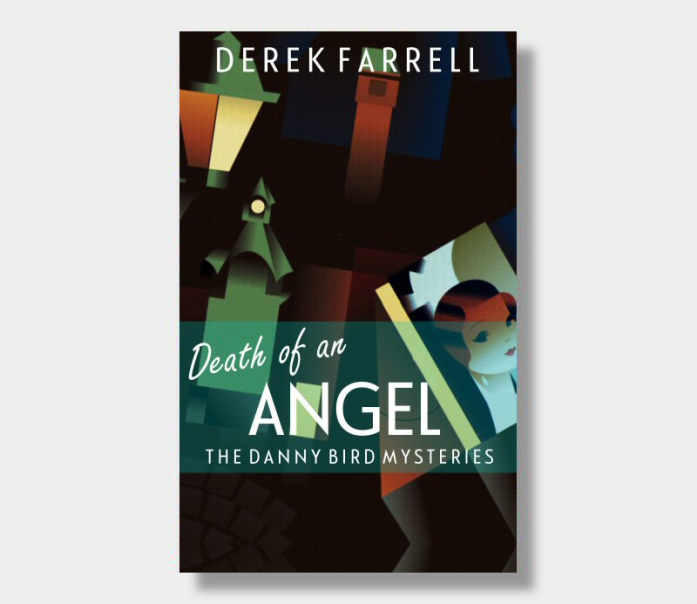 A woman is found dead in a London street – the evidence suggests she plummeted to her death from a nearby tower block – but did she fall or was she pushed? And why does she have Danny Bird’s name written on the back of her hand?

So begins this 4th magnificent outing for Danny and the gang from The Marq.

In the frame for a murder he didn’t commit, London’s self-proclaimed Sherlock Homo has no choice but to don his metaphorical deerstalker one more time to prove his innocence and uncover the truth about the tragic death of Cathy Byrne.

With the indomitably louche Lady Caz by his side, Danny plunges headlong into a complex investigation while at the same time trying to be a dutiful son to his increasingly secretive parents, and still find the time to juggle his frustratingly moribund love-life.

This is the first book by Derek Farrell that I have read and I really enjoyed it. Danny and Lady Caz are terrific characters – the banter between the two alone is worth reading the book for. Still if you’re reading Death of an Angel it’s for the well, not to put too fine a point on it, death oh and, yes, to find out whodunnit.

Has Cathy Byrne been murdered and, if so, why? Did Danny do it? If he didn’t can he find out what happened, why and who did?

Danny isn’t just trying to resolve these questions he’s got personal stuff going on, yes there’s Nick, the boyfriend, although that gets somewhat sidelined, not only for the investigation but because something odd is going on between his parents – I thought this sub-plot was handled particularly well bringing a tenderness into the book and insight into Danny’s character and life – and his siblings want him to find out what it is. They love their parents but should they – in the shape of Danny – really interfere?

And then there’s his solicitor she wants Danny to look into the death of another client who died when his car went off the road. Wasn’t it just that simple? Still Dot’s asked and she’s a friend, sort of, so a few questions just to check it out can’t do any harm now, can it?

He’s a busy boy is Danny along with running The Marq well luckily he’s got Ali to do that but still it is his actual work, his living. But Danny’s a bit, well you know he’s got this reputation, he’s a bit of a Sherlock or perhaps more a Miss Marple, no offence, because well because he just can’t let things go and, you got it, he’s nosey. Still Danny’s a good guy, isn’t he? He believes Cath Byrne deserves to have her murderer – if she was murdered – brought to justice. So, along with the wonderful and gutsy Lady Caz, Danny investigates and as they do we will meet some well-drawn characters to love and to hate, to fear and to, maybe, wish you knew them in person – under different circumstances of course!

While all this is going on the body count mounts, there are some pretty viscous attacks, not least on Danny himself, and a very intriguing plot unwinding that will keep you guessing and thoroughly gripped.

This is a cracking story, well plotted, well written, sprinkled with witty banter, filled with – often dark – humour and, whilst this is no cosy mystery, the denouement is delivered in true Conan-Doyle or, perhaps, we should say Agatha Christie style.

This is a terrific book and one I would more than happily recommend.

One lucky winner will receive a signed copy of Death of an Angel and 10 runners up will receive a set of Danny Bird pin badges featuring the covers of all four books.  To be in with a chance of winning all entrants have to do is visit derekfarrell.co.uk and subscribe.  Winners will be chosen on 1 July.

Also, anyone who purchases a Fahrenheit paperback also gets a free eBook download of the same book too.

With many thanks to Fahrenheit Press for an eCopy of Death of an Angel by Derek Farrell and to Emma at Damppebbles for inviting me onto this wonderful BlogTour. Do catch up with rest of the Tour:-

Derek Farrell has, since childhood, told stories. Of course, back then they were called lies, and usually got him in to trouble, but nowadays his stories, humorous poetry and song lyrics are entertaining people from Kansas to Crawley.

Derek grew up in a small terrace close to the Guinness brewery in Dublin’s Liberties neighbourhood, where the smell of roasting hops alternated with the yeasty fermentation of the mash, and the cry of the seagulls was interrupted occasionally by the snorting of an escaped cow on the rampage from the abattoir at the bottom of the street.

His jobs have included: Burger dresser, Bank teller, David Bowie’s paperboy, and Investment Banker on the 80th floor of the World Trade Centre.

Time in high finance, has given him an opportunity to observe people, to understand the persuasive power of language and to develop an insight into the workings of the criminal mind, whilst allowing him to live and work in Hong Kong, Istanbul, Tel Aviv, Prague and London.

And all the time, he’s been telling stories.