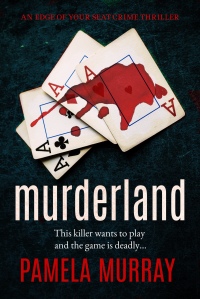 When DI Joe Burton and DS Sally Fielding are called to investigate a suspicious death in a care home, it is just the start of their problems.

As further bodies are discovered, with playing cards placed beside their bodies, the Manchester police realise they have their work cut out.

With the press closing in on the case, a criminal profiler is called in to help work out what the killer’s motive is.

With the clock ticking and more victims uncovered, Fielding and Burton must race to track down a twisted killer before it’s too late.

But could the killer be closer to home than anyone ever imagined?

I am delighted to be part of the opening day of the BlogTour for Murderland by Pamela Murray.

Set in Manchester and the North East this is a cracking read. Immediately from the tense prologue we are thrown into a murder. Chapter one brings another. They seem unrelated. It is with the death of a care home resident that we get into the story proper. This is no simple, tragic passing of an elderly man. It’s a somewhat bewildering murder – why was Nathaniel Jackson dressed somewhat oddly and is the playing card of significance?

Joe and Sally are DI and DS respectively but more importantly they are a team and have become friends. This is the authors first book but we quickly find it’s a relationship that has worked well in previous investigations making a strong but somewhat precarious bond. They are part of a wider team who also work well together. Still it is Joe and Sally who are the main characters and whose lives we start to learn about as the investigation progresses. I enjoyed getting to know them a little as the story progressed. Other characters are brought in, all who enhance the story in one way or another. This will surely be the first of several books and getting to know the main characters and the others who will be the mainstay of any future stories will surely make them even better.

Joe and Sally are both based with Greater Manchester Police (GMP). Joe joined the Manchester force from London. Sally is from the Northeast. Living in Greater Manchester I enjoyed the setting of the book, some of which was familiar. The book also travels with the investigation into the Northeast and I found this to be rather more lovingly recreated by the author, probably as this is her ‘patch’. Knowing this area a little from travelling and work over the years further enhanced my enjoyment. I do like to be able to picture the setting and when the storyline takes place in familiar areas it does make that easier.

Still it is the investigation into a murder that is the point of the story. So when another murder occurs and there are links Joe and Sally fear they have a serial killer at large. How many will die? Will the duo find the killer? How will it all end?

Pamela Murray has put together a wonderful cast of characters and placed them into a tense, twisty storyline. She has used pace and her characters to bring a well written book to all who enjoy reading crime fiction. The story is well crafted. It is well executed. It brings together the various threads to a terrific climax.

Thanks to Heather of Bloodhound Books for the invitation to join the Murderland Blog Tour and for an eCopy of the book.

Why not check out the rest of this great tour?

Author: Pamela Murray is from the North East of England and has spent most of her life living in Boldon. She began writing at an early age when she and her school friend used to write stories for one another. The writing continued on and off over the years but was only recently reignited when the same school friend introduced her to the local writers group she was in.

Pamela had intended to enter journalism after leaving school but found herself going to work in a Public Library instead and has always had more than a passing interest in books and literature.

When not writing Pamela is passionate about Cinema and her three grandchildren. She has also appeared as a Supporting Artiste in two episodes of the hit TV crime series “Vera”.

← Wolves at the Door by Gunner Staalsen trans. by Don Bartlett
Burnt Island by Kate Rhodes →

3 Comments on “Murderland by Pamela Murray”