Woman in the Water by Katerina Diamond

When a woman’s body is found submerged in icy water, police are shocked to find she is alive. But she won’t disclose her name, or what happened to her – even when a second body is discovered. And then she disappears from her hospital bed.

Detectives Adrian Miles and Imogen Grey follow their only lead to the home of the Corrigans, looking for answers. But the more they dig into the couple’s lives, the less they understand about them.

What’s their connection to the body in the river?

Why have other people they know been hurt, or vanished?

And can they discover the dark truth of their marriage before it’s too late?

This is the sixth in the DS Imogen Grey series. It can be read as a stand-alone but, as always, it’s great to read the full series and this is a series that packs a few punches!

DS Adrian Miles pulls a body out of the water – a woman barely alive.

Then another body, a dead body is found just along the water from where the woman was found. She has disappeared from the hospital. She has told Grey and Miles very little – they don’t even know her name. The doctors say that she wasn’t only beaten and left for dead, she had old injuries too. Injuries that indicate long term abuse.

It’s difficult to investigate when there’s so little evidence but Miles and Grey are both determined to solve the murder and the mystery of the woman.

Their own relationship is moving on. At first I thought that there was too much about it and it seemed to be overtaking the investigative element of the storyline. However, Katerina Diamond isn’t about, or at least not just about, romance it’s necessary to the plot and the characters development.

As you read there is a lot of trauma, some quite graphic, to be had in this book. It twists and turns with the investigation and will leave you shocked and stunned. Katerina Diamond does not shirk from dealing with difficult circumstances, events but she does handled them very well.

This case gets to DS Miles because of his childhood experiences. Imogen has somewhat more perspective but is incredibly loyal to Adrian. What happens to them in this book will have far reaching consequences on their relationships. This storyline includes murder, abuse, rape and more which makes for tough reading at times but are a necessary part of what happens. The difficult scenes are handled sensitively.

The book also includes passages from the point of view of the woman who was found in the water which, in my opinion, are an important element of the story. We hear from both Imogen and Adrian with some very powerful scenes conveying just how evil the perpetrator is.

The characters are well drawn and the storyline is gripping. This book is a hard-hitting, dark and gritty story that highlights a number of situations which, whilst making this book a tough read, also makes it a compelling and worth-while read.

With thanks to Sabah Khan Head of PR at Avon for the invite to join this astonishing BlogTour and to HarperCollins via NetGalley for an eCopy of the book.

Do check out the rest of the Woman in the Water BlogTour….

Katerina Diamond was born in Weston in the seventies. She moved to Thessaloniki in Greece and attended Greek school where she learnt Greek in just 6 months. After her parents’ divorce, they relocated to Devon. After school, and working in her uncle’s fish and chip shop, she went (briefly) to university at Derby, where she met her husband and had two children. Katerina now lives in the East Kent Coast with her husband and children. She is a Sunday Times and Kindle bestseller. 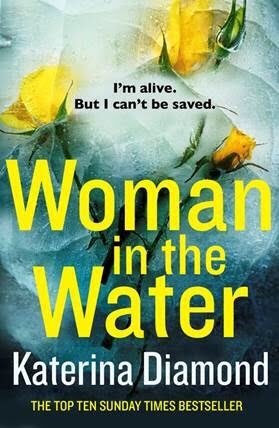 ← Cover Reveal: I Can See The Lights by Russ Litten @RussLitten @Wildpressed @LoveBooksGroup
The Retriever of Souls (D. I. Sterling Series) by Lorraine Mace →

2 Comments on “Woman in the Water by Katerina Diamond”