See Them Run by Marion Todd

Posted on October 18, 2019 by lovebooksreadbooks

In a famous Scottish town, someone is bent on murder – but why?

On the night of a wedding celebration, one guest meets a grisly end when he’s killed in a hit-and-run. A card bearing the number ‘5’ has been placed on the victim’s chest. DI Clare Mackay, who recently moved from Glasgow to join the St Andrews force, leads the investigation. The following night another victim is struck down and a number ‘4’ card is at the scene. Clare and her team realise they’re against the clock to find a killer stalking the streets of the picturesque Scottish town and bent on carrying out three more murders.

To prevent further deaths, the police have to uncover the link between the victims. But those involved have a lot more at stake than first meets the eye. If Clare wants to solve the case she must face her own past and discover the deepest secrets of the victims – and the killer.

What a wonderful setting for this new series from Marion Todd. I made an all too brief visit to St Andrews a couple of years ago after enjoying the Bloody Scotland crime festival. I thought it would be somewhere I would enjoy returning to. Now I have, albeit in my minds eye, through this splendid book.

DI Clare Mackay has recently joined the St Andrews force after a devastating incident she had whilst serving in Glasgow. She is the senior officer in St Andrews. So, when a man is brutally killed in a road traffic incident, she heads up the investigation. She and her team are barely into the investigation when another hit and run occurs. It’s seems to be the same perpetrator, there is a calling card left with each body and it all points to further murders.

This is a really good police procedural and we are taken on a grisly and heart rending journey to find the link between these murders and to catch a killer.

We are just getting to know Clare and the other characters in this first novel. I found her quite a sympathetic character she interacted well with colleagues, witnesses and suspects whilst maintaining a professional attitude. Her personal life is where we get more background and the two do collide especially when a DCI is brought in to act as the SIO. He seems to dislike Clare even though they have not previously worked together. She does wonder whether she has made the right move. Still the balance is good and this does not overshadow the investigation.

As the investigation continues we find out some rather dark and appalling things about the victims. This is handled well, is not graphic, whilst still allowing the reader to be caught up with the storyline. Clare’s instinct and experience allows for a heart stopping finale in the need to stop a further killing.

The story flowed well, building tension, drawing you into it and you were with Clare every step of the way. Such a good first outing must have many more investigations to come and I will look forward to immersing myself in them.

I hope you will give this splendid book a read and enjoy it as much as I did.

With thanks to Sophie at Canelo for early access to See them run by Marion Todd via NetGalley.

Buy See Them Run from the digital retailer of your choice right now: 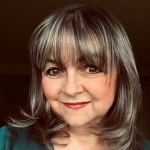 A native of Dundee, Marion studied music with the Open University and worked for many years as a piano teacher and jobbing accompanist. A spell as a hotel lounge pianist provided rich fodder for her writing and she began experimenting with a variety of genres. Early success saw her winning first prize in the Family Circle Magazine short story for children national competition and she followed this up by writing short stories and articles for her local newspaper.

Life (and children) intervened and, for a few years, Marion’s writing was put on hold. During this time, she worked as a college lecturer, plantswoman and candle-maker. But, as a keen reader of crime fiction, the lure of the genre was strong, and she began writing her debut crime novel. Now a full-time writer, Marion lives in North-east Fife, overlooking the River Tay. She can often be found working out plots for her novels while tussling with her jungle-like garden and walking her daughter’s unruly but lovable dog.

2 Comments on “See Them Run by Marion Todd”