Wolves at the Door by Gunner Staalsen trans. by Don Bartlett

Wolves at the Door (extract)

It had been an experience I would not have wished on my worst enemy.

I was taken to the police station and charged with being in possession of what they now called ‘sexually explicit material’ on my computers: films, pictures and books featuring child abuse. And I wasn’t the only person to be charged. Three other men had been brought in for the same reason, and during a later interview I found out their names: Mikael Midtbø, Per Haugen and Karl Slåtthaug.

I knew of course that I was innocent and that someone had planted this material on my computers, but that convinced neither the police nor the legal system. After the initial hearing I was held in remand while the case was investigated further. During another interview at the police station I seized an opportunity to escape, and then the nightmare began in earnest. In a race against time I did what I could to get to the bottom of the case, in which the main issue was this: who hated me with such an intensity that they had hacked my computer and planted this material?

I found the answer in a summer house in the village of Søre Øyane, Os Municipality, in a confrontation with four other individuals, all involved in the case in various ways. However, one of them got away. Later that evening I was standing by a diving tower facing Bjørna fjord, searching in vain for a man who had slipped into the sea after being outed as one of the ringleaders in the case. Wave after wave of breakers crashed on the shore, the wind howled around my ears, but no one reappeared from the foaming waters. He had been swallowed up.

I managed to get off the slippery, sea-soaked rocks. Back on dry land I rang two people: first Sølvi, to say everything was in the process of resolving itself, then my lawyer, Vidar Waagenes, so he could help prevent those words from coming back to haunt me. It hadn’t been so easy. When I returned to the summer house I was arrested by armed police, unceremoniously handcuffed, led to a vehicle and delivered post haste to Bergen Police Station. The only information I managed to pass on was that they should start a search for a man in Bjørna fjord. I didn’t find out until later whether that had been done. The orders from the operational commander, an officer I had never seen before, to the policemen taking me to the car had been short and sweet: This man has escaped remand before. Don’t let him out of your sight for a second.

They didn’t either, until they handed me over on the third floor of the police station, where the department head, Jakob E. Hamre, received me with a thick layer of repugnance daubed across his already-pale face. I made an attempt to clarify the situation for him, but he interrupted me with a raised hand: ‘I think we’ll wait until Waagenes is here, Veum, before we say anything.’

Fortunately, it wasn’t long before Waagenes arrived and I was able to start explaining. In addition to Hamre, Inspector Bjarne Solheim took part in the interview. He glared at me sourly, and I could well understand why. It was fairly clear that he had been blamed for allowing me to abscond a few days earlier.

The interview was recorded. Solheim sat writing on his laptop and both Hamre and Waagenes took notes. Initially, they let me talk more or less without interruption as I tried to summarise a case that had its roots in the past.

We talked until late in the night. After a few hours a report came back to Hamre to say that the search for a man in Bjørna fjord had been unsuccessful, but they would continue looking as soon as there was daylight. ‘The most important element of your proof is there,’ Hamre had commented, but Waagenes protested at once: ‘Not at all! Varg’s furnished you with so much information that as soon as you’ve examined all the other detainees’ computers and mobile phones there should be more than enough evidence for his statement.’

‘Let’s hope so. We’ll have to rely on the experts here.’

‘You’ve arrested the other three, I take it?’ I asked, and Hamre nodded in a measured way.

‘They’re being interviewed, but we’re unlikely to get through all the material tonight. You’d better prepare yourself to stay here longer until we feel we have a clear overview.’

‘I object!’ Waagenes exclaimed. ‘You’ve both known Veum for many years…’

‘It’s utterly inconceivable that Varg would’ve downloaded sexually explicit material with his background as a child-welfare officer and a private investigator.’

‘Which Varg has explained.’

‘Exactly. He has explained. Quod erat demonstrandum, as we Latinists like to say.’

‘Yes. And Mother Nille is a rock – Ludvig Holberg told us all we need to know about Latinists,’ Waagenes commented drily.

But Hamre won the tug of war in the end. I was still formally charged and had to spend further days and nights on remand, interrupted only by more tedious interviews.

On the third day I was summoned to yet another interview, where the police lawyer Beate Bauge, Hamre and Waagenes were present. Bauge was as erect and disgruntled as she had been for all the hearings. The look she sent me before she started speaking told me her hand had been forced. However, the conclusion was clear. Preliminary examinations of the other detainees’ computers had led to them taking the following decision: the charge against me had been withdrawn. After a short, dramatic pause she added: ‘For the time being.’ And she stressed that if any evidence to the contrary appeared I would have to expect to be brought in for further questioning. It was as if snow was falling quietly inside me. I didn’t erupt in whoops of joy and I didn’t burst into tears. However, I did feel a huge amount of relief that they had at long last taken me at my word and that the other computers had corroborated what I had told them.

‘And the other arrestees?’ I asked warily.

‘And Sigurd Svensbø? Has he been found?’

Bauge looked at Hamre, who shook his head.

‘No. But our experience of missing persons at sea is that it can be a very long time before bodies wash ashore, if ever.’

‘If ifs and ands were pots and pans there’d be no need for tinkers,’ Bauge said with the same disgruntled expression she wore earlier, and there were no further comments.

I left the police station in the company of Vidar Waagenes. On the doorstep outside we exchanged glances. It was as though I still hadn’t realised I was free, that I could do whatever I wanted – whether that was to go home, down to my office, visit Sølvi or catch the next plane to wherever in the world. In the end, Waagenes and I went for an early lunch at Holbergstuen, as of old.

But that was almost a year and a half ago. Now something had happened that had brought the case back to life. The first thing I did when I got into my office on Monday morning was ring Hamre, albeit with extreme reluctance.

Oooooh! Intriguing don’t you think? Even from this extract I like Gunnar Staalesens style and you’d hardly know this was a translation a great job by Don Bartlett.

You can see that you’re pretty well caught up on what you need to know and can go right in with this book without necessarily having to go back – although that’s always a good thing to do. Indeed, I have just bought myself We Shall Inherit the Wind because I do like to ‘catch up’ as much as possible and this looks like a terrific series, well written and well worth reading. No surprise as Orenda Books are the publishers and they know when they have a good author and books. Well now if that doesn’t send you rushing off to buy Wolves at the Door perhaps a trip around the BlogTour will.

With many thanks to Orenda Books for this wonderful extract and to Anne at #RandomThingsTours for the invitation to take part in the Wolves at the Door Blog Tour.

Do check out the rest of the #WolvesattheDoor tour by going to Orenda Books on Twitter.

First published in Norwegian as Utenfor er hundene by Gyldendal, 2018

Author: One of the fathers of the Nordic Noir genre, Gunnar Staalesen was born in Bergen, Norway in 1947. He made his debut at the age of twenty-two with Seasons of Innocence and in 1977 he published the first book in the Varg Veum series. He is the author of over twenty-three titles, which have been published in twenty-six countries and sold over five million copies. Twelve film adaptations of his Varg Veum crime novels have appeared since 2007, starring the popular Norwegian actor Trond Epsen Seim, and a further series is currently being filmed. Staalesen, who has won three Golden Pistols (including the Prize of Honour) and the Petrona Award, and been shortlisted for the CWA Dagger, lives in Bergen with his wife. 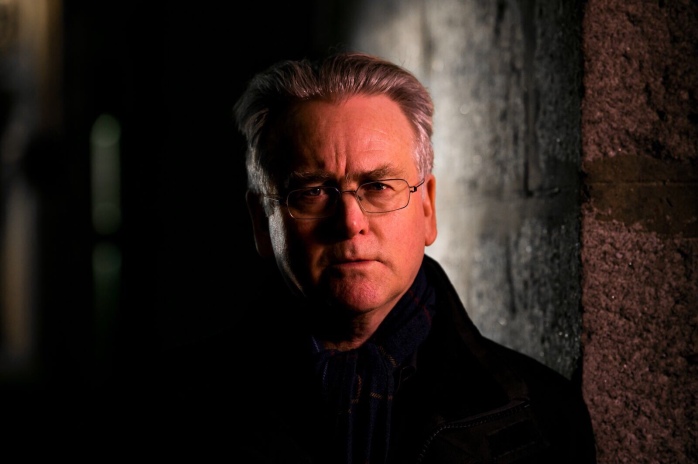 ← The Last Widow by Karin Slaughter
Murderland by Pamela Murray →

One Comment on “Wolves at the Door by Gunner Staalsen trans. by Don Bartlett”