#BlogTour – No Time To Cry by James Oswald

From one of the UK’s biggest crime writers – a phenomenal new series guaranteed to have your heart in your mouth. 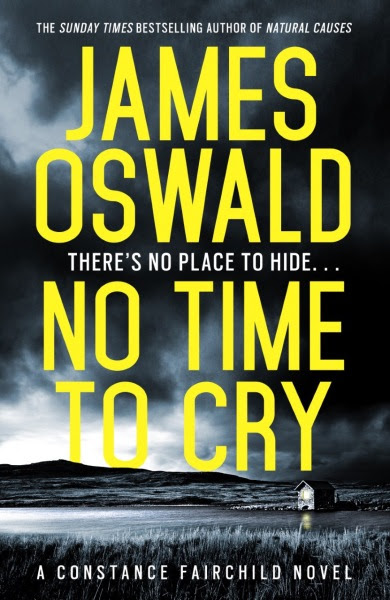 From the man who brought you the bestselling Inspector McLean novels.

Returning to their base of operations, an anonymous office in a shabby neighbourhood, she finds the bloodied body of her boss, and friend, DI Pete Copperthwaite. He’s been executed – a single shot to the head.

In the aftermath, it seems someone in the Met is determined to make sure that blame for the wrecked operation falls squarely on Con’s shoulders. She is cut loose and cast out, angry and alone with her grief… right until the moment someone also tries to put a bullet through her head.

There’s no place to hide, and no time to cry.

I’m delighted to have been invited to join the No Time To Cry BlogTour by Anne Cater of RandomThingsTours and to be opening the tour today alongside  @collinsjacob115  Do take a look at the BlogTour details below.

Although I’ve heard good things about his books I’d not read any James Oswald before! So when the opportunity arose to join this tour I jumped at it.

I’ve often said that one of my main reasons for reading a series from a writer, apart from a cracking good story of course, is the ability to get to know it’s characters especially the main character(s), the author has the time to bring that insight and depth. With No Time To Cry there is one main character and the reader is immersed in DC Constance ‘Con’ Fairchild. The story is told from her point of view, by her and we are immediately plunged into her thoughts, life and character.

The premise is terrific DC Fairchild is working an undercover operation and is called into the operations base where she finds her boss DI Pete Copperthwaite dead, he’s been shot, executed. DCI Bain attends the scene, even in the initial response to Pete’s murder it’s fast becoming clear that something is seriously amiss. Con is sent home to await a debrief.

She takes a slight detour on the way home to the station to check out the surveillance system in the ops base. What she finds only confirms all her fears and when she comes in for the debrief it’s clear where the blame is being laid.  Is Con really a suspect – how could that be? Pete wasn’t just her boss, he was her friend someone she looked up to and respected she could never do such a thing! Surely they know that….

Professional Standards are being brought in and Con’s life and career seem to be going down the pan fast. Then someone tries to kill her.

The characters are well drawn, as you would expect from such an experienced author, the story builds pace and tension with plenty to keep you guessing along the way. Some of the characters are not too nice and some of the subject matter may be difficult but there is nothing overly graphic. I liked Con, although the role Pete was given irked ever so slightly, she has an interesting background and a strong spirit.

As the plot thickens we follow Con north to escape the threat in London and get some space to work out what’s going on. There are twists and turns to this elaborate plot which unfold as Con puts the pieces together. Will she find Izzy before it’s too late? Will she clear her name of Pete’s murder and find the real killer? This is a compelling story.

I look forward to reading more of Constance Fairchild.

What are the three most important character traits of your protagonist? Dogged determination, ability to think on her feet, she doesn’t much care what others think of her

Where is the novel set?
London, Northamptonshire, Perthshire and Angus

Who is your biggest influence as a writer?
Without a doubt, Terry Pratchett

Have you ever killed anyone off from real life in one of your novels?
Frequently. One friend even asked if he could be the villain. He dies naked in his bath.

What was your favourite ‘terrible’ review?
The Hangman’s Song, book three in the Inspector McLean series, has a one star Amazon review that ends “Incidentally, even the title is misleading – there’s no singing in the book.”

What is your favourite writing snack?
Chocolate. It’s the perfect brain food.

Which of your characters would you most like to have dinner with?
Madame Rose. Or maybe Mrs McCutcheon’s Cat.

With thanks to Anne Cater for the invitation to join the No Time To Cry Blog Tour and to Wildfire for a copy of the book. Like to hear more about it? Then check out these brilliant Blogs………

Wildfire an imprint of the Headline Division of Hachette UK

James Oswald is the author of the Sunday Times bestselling Inspector McLean series of detective mysteries, as well as the new DC Constance Fairchild series. James’s first two books, NATURAL CAUSES and THE BOOK OF SOULS, were both short-listed for the prestigious CWA Debut Dagger Award. AS COLD AS THE GRAVE is the ninth book in the Inspector Mclean Series.

As J D Oswald, James has also written a classic fantasy series, The Ballad of Sir Benfro. Inspired by the language and folklore of Wales, it follows the adventures of a young dragon, Sir Benfro, in a land where his kind have been hunted near to extinction by men. The whole series is now available in print, ebook and audio formats.

One Comment on “#BlogTour – No Time To Cry by James Oswald”