Posted on October 13, 2018 by lovebooksreadbooks

When the seventh Earl of Lowesdale is found hanging from the rafters at Wasdale Hall, everyone assumes the aging, hard-partying aristocrat had finally had enough of chasing the glory of his youth. But when the coroner finds signs of foul play, DI Kelly Porter is swept into a luxurious world where secrets and lies dominate.

At the same time, two young hikers go missing and it’s up to Kelly to lead the search. But digging deeper reveals ties to two other unsolved disappearances and Kelly and her team find themselves in a race against time.

Now, as all roads of both investigations and Kelly’s own family secrets lead to Wasdale Hall it becomes more important than ever for Kelly to discover the devious truths hidden behind the walls of the Lake District’s most exclusive estate…

I am absolutely delighted to have been invited to host an extract from the third book in Rachel Lynch’s DI Kelly Porter series Dead End having read and loved the two previous books Dark Game and Deep Fear …..

Many thanks to Ellie at Canelo for inviting me to take part in the Dead End Blog Tour.

I am so glad to see this series continuing to bring such terrific stories from Rachel Lynch. We have also been able to see Kelly and Johnny’s relationship develop. Here they are chatting about Kelly’s career but then an item comes on the news ……

‘It’s the same in the army,’ Johnny said now. ‘The better you are in the field – allegedly – the higher you go and the further away from the real troops. You end up getting a bunch of muppets sitting behind desks in Whitehall, making decisions for the boots on the ground and risking their lives. They get out of touch. It’s like teaching or the NHS: top heavy with honour-seeking egotists. It’s crazy but unavoidable.’ He never had to explain army jargon to Kelly, because it was so close to the language used by coppers. It was one of the things they loved about each other.

‘And that’s exactly what I don’t want. I joined to be a copper, not a document-handler. Paperwork doesn’t excite me, Johnny.’

‘I know, but there are benefits too: you’d have the authority to get other people to do stuff on your behalf,’ he pointed out. ‘Isn’t that what always frustrates you? When you know what you’ve got to get through, when you should be concentrating on connecting the dots rather than drawing them all first? I’ve seen it, I’ve seen you doing it, and you hate it.’

‘I know, but if I’m not there at the beginning, then I’m playing catch-up. It’s Hobson’s choice,’ she said. She stood up and pulled her jeans over her wet bikini bottoms; she’d rather do that than hang around and get colder. They started to pack up.

‘What about the money?’ he asked.

‘You don’t strike me as the type to bother about that kind of thing,’ she said, and smiled.

‘I only don’t bother about it because I have enough of it. Stop evading the question. No one refuses promotion, Kelly.’

‘Well I do. I’m happy where I am, and I’ve built a cracking team that works.’

‘Can’t you take the title and stay where you are?’ he asked.

‘I already asked that. They’re thinking about it.’

Johnny shook his head. She’d been sitting on the information all along.

She slipped on flip-flops and picked up her things, wet hair dripping down her sweater. She didn’t mind; she wasn’t the type to get prissy about it. He slapped her bottom again, probably half because he knew it pissed her off, and half because he wanted to touch her. She rounded on him and stuck her chin out.

She turned around and marched away, with Johnny bringing up the rear. She knew he was watching her swing her hips from side to side, as she did when she was making a point.

When they reached her house in Pooley Bridge, she went straight to the fireplace to start a fire. The evening air still had a pinch in it, and besides, Kelly liked to take advantage of the open fireplace in her new home whenever she could. She could stare at the flames lapping over glowing logs all evening. Johnny opened a bottle of wine, and Kelly flicked on the news. They were growing more comfortable with each other, and moved around like a couple. Occasionally Kelly considered making things official, but more often than not she dismissed the idea straight away.

The TV had been left on full volume for some reason, and the noise assaulted them.

‘Concerns are growing as to the whereabouts of two young women in Cumbria,’ said the reporter. The man was standing ten minutes from Kelly’s door, at Howtown campsite. Both Kelly and Johnny were aware of the drama unfolding not ten minutes from where they lived; Johnny had been a part of the initial search for the girls, which was still ongoing. They watched the report intently and Kelly sipped her wine. It was full-bodied and herby, just the way she liked it. She’d put one of her junior officers in charge. These types of cases usually ended up the same way: with the unfortunate hikers being found stuck on some crag somewhere with piss poor equipment and no phone. Kelly laid her head on Johnny’s chest, and he moved so that he could put his feet up with hers. He probably wouldn’t be going anywhere tonight.

‘The two women were last seen at around six o’clock on Sunday evening, two days ago.’

Kelly’s eyes half closed as she allowed herself to relax. She was trusting Rob Shawcross to investigate the case; unless something major changed to elevate the file beyond missing, she herself wouldn’t need to become involved. Now, however, photographs of the missing girls appeared on the screen, and she sat up.

‘What is it?’ Johnny asked.

The missing persons’ case had been just that to Kelly: a report containing data that needed to be classified, and that was all. It wasn’t necessary for a detective of her rank to delve further unless it was elevated to suspicious, and that didn’t normally happen for forty-eight hours, by which time they’d surely be found. She hadn’t seen the girls’ photographs. Until now.

The two young women were in their late teens. They attended Lancaster University together and had been on a camping trip to Howtown, near Ullswater, when they disappeared. Initial enquiries had unearthed ordinary profiles; nothing that raised alarms. The girls seemed to be sensible, skilled and used to the mountains, with no history of rash decisions or risk-taking. Rob had contributed the details in the team brief this morning, and mountain rescue was working round the clock.

Kelly fiddled with her hair and looked at the photographs again. Johnny watched her.

As she studied their faces, she bit the inside of her lip. Both girls had striking blonde hair, and were also extremely pretty. It was something in the shape of the faces, as well as the hair colour and age, that made Kelly reassess the status of the inquiry. In February, another young woman had gone missing and there’d been a medium-scale hunt involving local TV and radio, but the case had been passed to Lancaster when it was revealed that the last sighting was Carnforth train station. Now, alarm bells were ringing.

‘Freya Hamilton. She went missing just under four months ago. We got a call from Humberside Police – that’s where it was reported, by her sister – saying she was working in the Lakes at the time. We took it on, but it quickly became clear that there’d been a sighting of her since then in Lancashire, so we passed it to them.’

‘You never mentioned her,’ Johnny said.

‘I know, the case was off my desk as quickly as it landed really. To be honest, I never gave it a second thought after it went to Lancashire Police.’

‘So you’ve no idea if she was found?’

‘But now you want to know?’

She looked at him and nodded, biting her lip.

Wow! Well that just left me wanting to rush off and read more! I’ll definitely be reading and reviewing this wonderful book soon, thanks Ellie and Canelo for a copy.

So, here in the third book it looks like we are getting to know Kelly even more on a personal level, which is what a series gives to the reader and one of the reasons I enjoy reading them. Also, from this extract, we can see the start of another amazing story and it’s sure to be another cracker. Like to see more about Dead End? then do read on…

So, you’d like to read more about Dead End? Well just look at all these blogs you can check out on the rest of this terrific tour…..

Rachel Lynch grew up in Cumbria and the lakes and fells are never far away from her. London pulled her away to teach History and marry an Army Officer, whom she followed around the globe for thirteen years. A change of career after children led to personal training and sports therapy, but writing was always the overwhelming force driving the future. The human capacity for compassion as well as its descent into the brutal and murky world of crime are fundamental to her work. 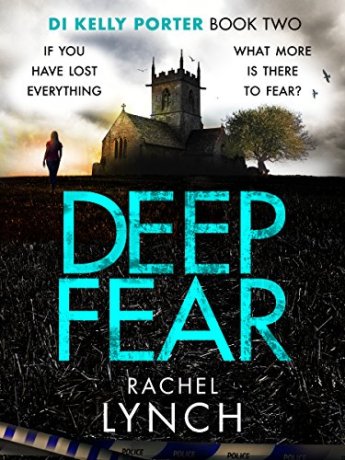