Posted on September 3, 2018 by lovebooksreadbooks

Book #1 in the Calculated Series

A criminal hiding in plain sight on campus. A professor caught in the middle. Can Dr. Ree Ryland help the FBI stop a killer before it’s too late?

Dr. Ree Ryland is an engineering professor who loves her job and plays by the rules. Her life is reassuringly predictable – until an enemy hiding in plain sight decides her squeaky-clean reputation is the perfect cover to commit a crime.

When Agent Parker Landon and his FBI team discover that someone at the university has been procuring military-grade hardware by disguising it as test equipment, all evidence points to Ree. After the FBI intercepts a shipment that puts Ree in the clear, Parker is forced to tell her that she’s being used as a pawn by an unseen enemy. And now she’s in that enemy’s crosshairs. Ree turns down the protective detail offered by the FBI and insists on using her inside knowledge to help with the investigation. Parker is leery of bringing a civilian on to the team, but he’s surprised at how much fun he has working with Ree, even as he tries to keep her out of harm’s way.

Parker, Ree and the FBI team find increasingly worrying evidence that someone is quietly acquiring everything they need to cause destruction on a massive scale. Now, they must uncover the motive and identity of the killer hiding among Ree’s friends and colleagues before it’s too late.

I am delighted to have the author of #CalculatedDeception K T Lee on my blog today talking about what has inspired her to write about Parker, Red and the FBI team.

When our youngest child was a baby, I spent a lot of sleepless nights rocking my little one back to sleep. To help pass the time (and stay awake!), I read wonderful stories: mysteries, fantasies, thrillers, romance – all with a strong helping of escapism. As I read novel after novel, a small idea began to form about the kind of book I’d write if I had the chance. And instead of fading away over time, the idea began to grow. A mechanical engineer by day, I realized I had a unique perspective on women in STEM. I’d always considered becoming a college professor and a college campus seemed like an environment ripe for mischief. Especially in a research lab, where the new and innovative might be the perfect cover for something nefarious in disguise. Fortunately, I was too exhausted to really understand what I was getting myself into!

One night, after the kids were in bed, I sat down at my computer and began to write the story of Dr. Ree Ryland, an engineering professor who finds herself in the middle of some criminal activity on campus. I brought in FBI agents to help (after there are a few misunderstandings, of course), so that Dr. Ree Ryland could be a heroine that readers could root for even as they worried that she might get caught in the crossfire.

I built the story a chapter at a time, using my time in the car or running errands to brainstorm and typing away at night whenever I had a free moment. Before I knew it, Calculated Deception (Book 1 in The Calculated Series) was born. I picked elements from all my favorite genres and gave them my own unique twist. I call Calculated Deception a cozy thriller – a character-driven, page-turning mystery with a bit of fun banter and sweet romance along the way. While I didn’t know what to expect when releasing my first book, I’m so grateful for the wonderful, kind comments from readers. I hope readers continue to enjoy the books, since I’m sure having a lot of fun writing them!

My thanks go to K T Lee for her terrific post about #CalculatedDeception. What an inspiration for everyone thinking of writing especially those with family commitments or who have little time to write for other reasons. I hope you’ll give Calculated Deception a read – enjoy!

Also, thanks to Kelly at #LoveBooksgrouptours for inviting me on board this wonderful Blog Tour and, with Vertical Line Publishing, providing an eBook of Calculated Deception. I have not received any payment in relation to my participation in this Blog Tour nor any future review that may appear on my blog.

Would you like to read more about Calculated Deception by K T Lee?  Then enjoy these wonderful posts on the #BlogTour……

K.T. is a mom, engineer, and writer of books about women in STEM fighting international crime. When K.T. began to write the kind of books she wanted to read, she mixed clever women and the sciences with elements from thrillers (and a dash of romance) to create The Calculated Series. 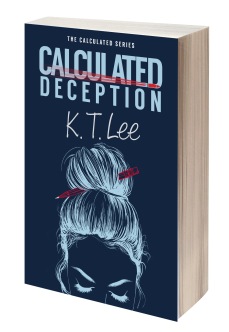 Before Scarlett helped solve the cases in Calculated Deception and Calculated Contagion, she was a brand-new profiler at the FBI’s Chicago field office. When a high-profile charity is targeted by a cybercriminal, Scarlett is charged with leading a team of special agents to find the individual hiding behind the malicious code.

When the FBI traces shipments of military-grade hardware to a university lab, Dr. Ree Ryland is their primary suspect. After the FBI intercepts a shipment that puts Ree in the clear, Parker is forced to tell her that she’s being used as a pawn by an unseen enemy. Ree offers to use her inside knowledge to help catch the criminal hiding in plain sight, but can they find him before it’s too late?

When vaccine researcher Dani Christensen is kidnapped and taken to a remote camp in Europe, CIA officers Cam Mitchell and Tyler Scott rescue her and bring her safely back home. The CIA initially thinks Dani was kidnapped for ransom, but they soon realize she was followed back to her lab. Now, the CIA must catch Dani’s kidnapper before he releases a potentially deadly contagion for political gain.

Book 3 in The Calculated Series is coming soon! Check back here or follow me on social media for updates!