Strangers on a Bridge by Louise Mangos

Posted on July 12, 2018 by lovebooksreadbooks 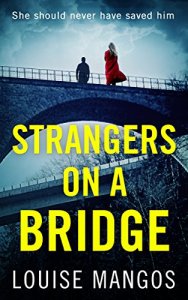 She should never have saved him.

When Alice Reed goes on her regular morning jog in the peaceful Swiss Alps, she doesn’t expect to save a man from suicide. But she does. And it is her first mistake.

Adamant they have an instant connection, Manfred’s charming exterior grows darker and his obsession with Alice grows stronger.

In a country far from home, where the police don’t believe her, the locals don’t trust her and even her husband questions the truth about Manfred, Alice has nowhere to turn.

To what lengths will Alice go to protect herself and her family?

Louise Mangos’ story tells of a woman who is trying to settle in a new country with her family; the authors knowledge and love is of Switzerland is evident as she describes the landscape and scenery beautifully giving the book a very real feeling which adds to the atmosphere of the story.

Alice is a runner it keeps her grounded. She’s out running when she finds Manfred on the bridge where she talks him out of committing suicide.

Alice, her family and friends think this was an act of compassion and think little more of it. Manfred agrees but sees much more into that act of kindness and he has some curious ways of showing his gratitude, his perspective is all wrong.  Alice is worried, what’s happening is wrong, yet everything she does to sort it out hits a brick wall.

Alice is still getting used to the Swiss culture and way of life it is easy to empathise with her when she’s confronted with unfamiliar systems. The rigid guidelines that are part of what she confronts do seem curious. Manfred is clearly a danger, isn’t he? So why won’t anyone listen to her?

As we follow Alice through her ordeal we encounter twists in this tale that will take your breath away.  You become so invested in what is happening.  This is a story seemingly unbelievable and yet we know happens. Alice doesn’t always have a good sense of judgement. However, the Swiss system, to a non-Swiss, feels rigid, uncompromising and frustrating. This leaves Alice with only one course of action in her mind. What happens in the end will grip you and leave you shattered in this nightmarish tale of obsession.

With thanks to HarperCollins via NetGalley for an eARC of this book.

Louise Mangos grew up in rural north Hertfordshire, England. Her passion for writing was prompted by winning a poetry competition at the age of eleven and subsequently seeing her work published in the local newspaper. Her determination to see the world led her to set aside her artistic desires on leaving school, to obtain a Diploma in Business Communications, before embarking on a series of global travels during which she never stopped writing. She returned to art to study several foundation courses in Switzerland, then later journalism and creative writing at the University of Colorado in Boulder in her mid-twenties. Following a series of creative and novel writing workshops, the ambition to publish a full-length work of fiction was hatched.

Her first novel, the psychological thriller Strangers on a Bridge, was shortlisted in the Flash 500 Opening Chapter Competition in 2015, finalist in the 2016 Exeter Novel prize, and long listed in the Bath Novel Award 2017.

One Comment on “Strangers on a Bridge by Louise Mangos”