I Know Where She Is by S B Caves

Posted on July 2, 2018 by lovebooksreadbooks 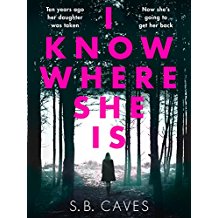 On the tenth anniversary of her daughter Autumn’s abduction, Francine receives an anonymous note containing just five words: I KNOW WHERE SHE IS

When a young woman approaches her the next day claiming to have sent the letter Francine wants to dismiss it as a cruel, twisted joke.

But the stranger knows things that only Autumn would know.

It soon becomes clear that Francine must go to dark places in order to learn the truth about her child’s kidnapping.

She will discover that danger comes from unexpected sources. She will do things she never imagined herself capable of.

But will Francine get her daughter back – or is it too late?

I Know Where She Is by S.B. Caves is a hard-hitting, gritty novel about a mother, Francine, whose daughter, Autumn, was taken whilst out shopping.

Will, her ex husband, has become rich by talking and writing about what happened, how to deal with loss and moving on – just like him?

Francine has never given up hope of getting Autumn back but on the 10th Aniversary of her being taken she receives a note – I Know Where She Is.

The note motivates Francine and, when Lena tells her story, she goes off on what may seem an impossible, perhaps even foolish but certainly dangerous journey in search of her daughter.

The characters are believable. Francine has depths of strength and grit that makes it easy to relate to and empathise with. The storyline comes mainly from Francines angle but not solely and there are some very sinister implications along with the darkness.

We see how the loss, and guilt, has turned Francine into a hard-drinking, shadow of a person but as we find out what did happen to Autumn it becomes dark, heartbreaking and it is almost too much. A few readers who may find reading parts this story difficult but it is not sustained and Caves does supply sufficient hope, courage and determination in extremely abhorrent circumstances.

This is a very dark tale of kidnapping and abuse, of loss but is also one of courage and hope. Caves keeps it moving along at a really good pace and you will be hooked on this gripping read.

With thanks to Canelo via NetGalley for an eProof of I Know Where She Is.