The Givers of Stars by JoJo Moyes 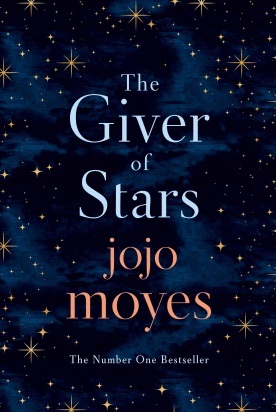 ‘Alice had come halfway across the world to find that, yet again, she was considered wanting. Well, she thought, if that was what everyone thought, she might as well live up to it.’

But stuffy, disapproving Baileyville, Kentucky, where her husband favours work over his wife, and is dominated by his overbearing father, is not the adventure – or the escape – that she hoped for.

That is, until she meets Margery O’Hare – daughter of a notorious felon and a troublesome woman the town wishes to forget.

Margery’s on a mission to spread the wonder of books and reading to the poor and lost – and she needs Alice’s help.

Trekking alone under big open skies, through wild mountain forests, Alice, Margery and their fellow sisters of the trail discover freedom, friendship – and a life to call their own.

But when Baileyville turns against them, will their belief in one another – and the power of the written word – be enough to save them?

Inspired by a remarkable true story, The Giver of Stars features five incredible women who will prove to be every bit as beloved as Lou Clark, the unforgettable heroine of Me Before You.

I have often seen book reviews and comments on previous JoJo Moyes books but for one reason or another not read any. When I saw The Giver of Stars on NetGalley and read the summary I was fascinated. As someone who loves reading, books and libraries it seemed just right. The real-life history behind the storyline along with so many important female characters was just too intriguing to ignore. Off went my request and I was absolutely delighted when it was granted.

The book opens in England with Alice who feels she is not meeting expectations and is therefore something of a disappointment to her parents. She meets Bennett and after a brief time they marry and she is off to new and, she feels assured, happier times.

Moving swiftly from England to the USA we follow Alice to Baileyville, Kentucky. Here life is not quite as she expected. She feels like one stifling life has been exchanged for another. Then one day whilst at a church meeting she hears Mrs Brady speak about a library service stemming from the WPA initiative (see information below) whereby books are to be delivered free of charge by horse-back to remote areas, a travelling library – the Pack Horse Library. She asks for helpers and puts forward her daughter Izzy. No one else offers to sign up but then Alice, much to Bennett’s chagrin, says she’ll do it.

Margery O’Hare is already part of the Pack Horse Library. She’s a free spirit, independent, unconventional and a bit of a lone wolf. Margery has a passion for books, for reading and is fiercely determined to make the travelling library a success.

There is already another travelling library rider, Beth Pinker, and Fred Guisler is housing the library in his old barn.

It’s the 1930s, it’s still a truly male dominated world, women need to know their place and life can be tough. The Great Depression was taking a huge economic toll on America. It was still unusual for the times to have women working like this but times and women were changing.

The library is begun. It’s a terrific idea even though some don’t see it that way. Soon enough Margery, Alice, Izzy and Beth build a thriving library. The long, arduous hours spent delivering has left the women tired. Margery realises they need to bring some better organisation, a better lending system, a way of getting the books repaired quickly and getting use out of those books and magazines no longer able to be mended. Enter Sophia.

The characters in this book are wonderful Alice, Margery, Izzy, Sophia and Beth each have their own experiences and it is great getting to know them alongside Mrs Brady, Kathleen, Fred, William and the Horners. Of course, there are some nasty characters too. I had my favourites and no doubt other readers will have theirs but that just shows how well written they are that this book, it’s characters and theirs lives are so believable, so realistic.

The library brings not only books and people together, serves the community but builds a great friendship between these five women. We hear their stories along with that of the library and some of those they serve. It goes beyond lending out books when massive rainstorms come and these women go courageously to the aid of their community.

Alice loves her work, feels so at home with her co-workers, her friends especially Margery. It is to Margery she turns too in her troubles but Margery has troubles too. She’s been making powerful enemies and when, as the snows melt, a body is found it brings dreadful consequences and untold misery.

This is a wonderful book, a story that so deserved telling and JoJo Moyes had done that beautifully. She has brought us into the life and lives not only of these amazing women but of the people of Kentucky. You feel like you are there in the mountains, in the town and in the hearts and homes of this beautiful place. This is a fabulous book with a wonderful cast of characters whose spirit, fortitude and resolve should and, no doubt, will live long in both the memory and heart of those who read it.

My thanks to Michael Joseph via NetGalley for an eCopy of The Giver of Stars by Jojo Moyes.

Institute of Museums and Libraries (USA)

Jojo Moyes is a novelist and journalist. Her books include the bestsellers Me Before You, After You and Still Me, The Girl You Left Behind, The One Plus One and her short story collection Paris for One and Other Stories. Her novels have been translated into forty-six languages, have hit the number one spot in twelve countries and have sold over thirty-eight million copies worldwide. Me Before You has now sold over fourteen million copies worldwide and was adapted into a major film starring Sam Claflin and Emilia Clarke.

The Giver of Stars is Jojo’s 15th novel and will be published in hardback, ebook and audio on 3rd October 2019. #TheGiverOfStars