IN THE ABSENCE OF MIRACLES by MICHAEL J. MALONE

Posted on September 20, 2019 by lovebooksreadbooks

In this powerful new thriller, Michael J Malone returns to A Suitable Lie territory, movingly and perceptively addressing a shocking social issue. Chilling, perceptive and heartbreakingly emotive, In the Absence of Miracles is domestic noir at its most powerful, and a sensitively wrought portrait of a family whose shameful lies hide the very darkest of secrets.

John Docherty’s mother has just been taken into a nursing home. Following a massive stroke, she’s unlikely to be able to live independently again. With no other option than to sell the family home, John sets about packing up everything in the house. In sifting through the detritus of his family’s past he’s forced to revisit, and revise his childhood.

In a box, in the attic, he finds undeniable truth that he had a brother who disappeared when he himself was only a toddler. A brother no one ever mentioned. A brother he knew absolutely nothing about. A discovery that sets John on a journey from which he may never recover. For sometimes in that space where memory should reside there is nothing but silence, smoke and ash.

John’s mother has had a stroke and now resides in a care home. John is going to have to sell her home, the family home, in order to pay the costs. He needs to sort out and clear the house making a start in the attic. He finds some stuff that relates to another child. He has a younger brother, Chris, but this is someone different. He’s older than John, the family resemblance is unmistakeable but who is he?

John starts to look into it – he has another brother! He never knew and when Chris turns up on a flying visit John explains what he’s found. Chris wants to know what it’s all about too, what happened and says he will be back. John continues and, on his return, Chris joins the search for answers.

What transpires is a harrowing although not an overtly or unnecessarily explicit story.

This is not a book that will be easily read with regard to it’s subject matter. Yet it is one that brings difficult, horrendous experiences into the open. It shows how important it is to have places of refuge, trustworthy people to intervene and help. We must ensure there are always such places and people available when needed. That help is readily available.

This book is gripping. It will sear into your mind and crush your heart. In the absence of miracles it will bring a sliver of hope.

The characters, foremost John, are well written and the subject matters well handled. The thoughtful and sensitive way in which the various situations and the characters actions, thoughts and feelings are portrayed make this story a truly worthwhile read.

Many thanks to Orenda Books for an eCopy of In the Absence of Miracles by Michael J Malone and to Anne from #RandomThingsTours for the invite to read and review. Like to check out the rest of the tour? Here’s the list… 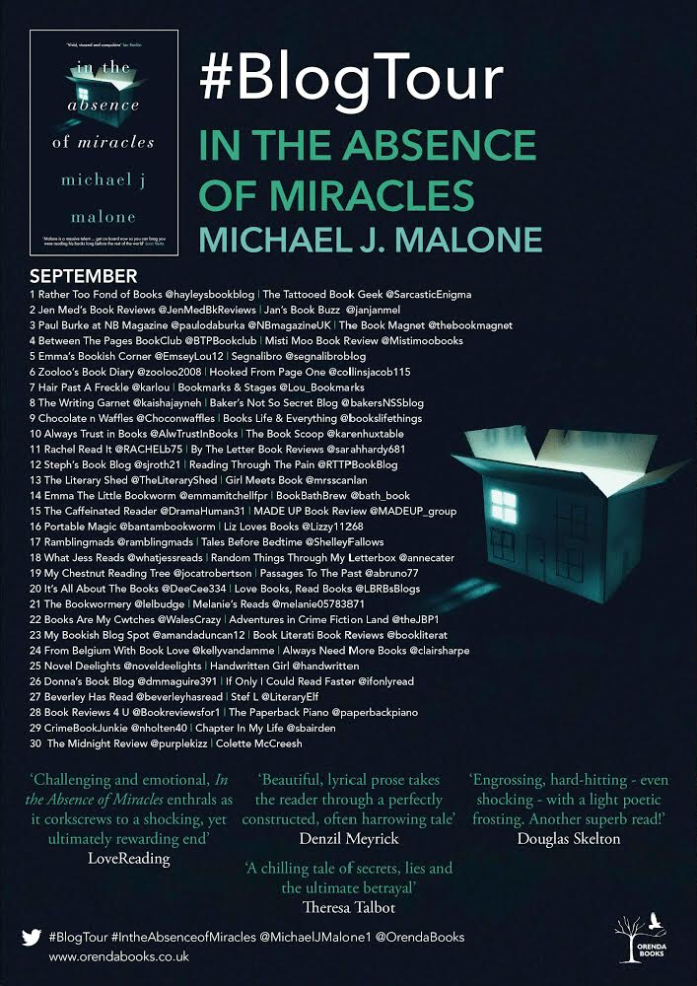 Author: Michael Malone is a prize-winning poet and author who was born and brought up in the heart of Burns’ country. He has published over 200 poems in literary magazines throughout the UK, including New Writing Scotland, Poetry Scotland and Markings. Blood Tears, his bestselling debut novel won the Pitlochry Prize from the Scottish Association of Writers. Other published work includes Carnegie’s Call; A Taste for Malice; The Guillotine Choice; Beyond the Rage; The Bad Samaritan and Dog Fight. His psychological thriller, A Suitable Lie, was a number-one bestseller, and the critically acclaimed House of Spines and After He Died soon followed suit. A former Regional Sales Manager (Faber & Faber) he has also worked as an IFA and a bookseller. Michael lives in Ayr.