The Murder Mile by Lesley McEvoy

Posted on May 8, 2019 by lovebooksreadbooks 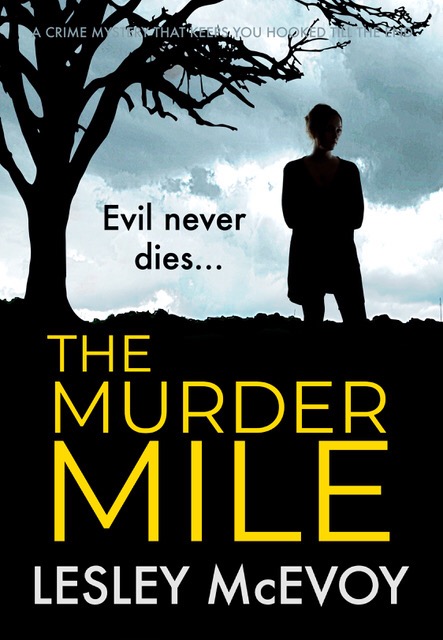 Forensic Psychologist, Jo McCready is assisting DCI Callum Ferguson on a murder inquiry, when one of her patients is found brutally murdered.

Jo was the last person to see Martha Scott alive. She was helping Martha unlock a repressed memory. But during the session Jo unlocked more than she bargained for. An alter personality introduces himself as the reincarnation of Jack the Ripper – and thanks Jo for setting him free to kill again.

As Ferguson’s team race to find Martha’s killer, a series of copycat killings begin, replicating ‘The Autumn of Terror’ in 1888. But if Jack is just a construct of Martha’s damaged mind, who killed her?

As the body count rises, Jo must construct a profile to stop the murderer re-creating the terror of the most infamous serial killer of all time.

But not everyone is on Jo’s side. The police Intelligence Unit have their own profiler, Liz Taylor-Caine, who resents Jo’s involvement as a contributing expert in the case.

Suspicion about Jo’s involvement in the killings increases when someone close to the team becomes one of Jack’s victims.

And as the anniversary of the final and most gruesome of all the killings looms, Jo discovers that the killer has one murder on his mind far closer to home…

I am delighted, on the second day of this splendid blog blitz, to be hosting Lesley McEvoy the author of this marvellous book The Murder Mile

When I tell people about my book, one of the first things I’m asked is where the idea came from? I suppose the short answer is that it sprang from the job I do. I’m a behavioural analyst – a profiler by trade. I profile human behaviour and the way people interact with each other. But I soon found that there were more psychopaths in business than there were in prison. So I took my skills into the corporate world. Profiling people in business as well as training people who work in potentially risky environments to identify suspicious behaviour and manage confrontation.

​Alongside my corporate work, I also have a private psychotherapy practice and it was during my work there that the idea for the book first presented itself.

​Quite a few years ago (shortly after setting up in private practice) a friend of mine asked if I would see someone she knew. I’ve changed the details of the condition and the identity of the client here, but in brief the lady in question wanted hypnotherapy. She had used it successfully in the past and felt it would help with her current situation. However, her illness was becoming so severe that she hadn’t been able to leave her home for several months. That made accessing therapy quite difficult, so my friend asked me if, as a favour to her, I would bend the rules and see the client at home rather than at my practice. With hindsight it was a rule I shouldn’t have broken – but hindsight is a wonderful thing.

​It was the middle of winter and by 5pm it was already dark. As I followed the satnav I began to think I’d been given the wrong address. I drove down a rough country lane that became narrower and narrower, eventually bringing me to a small cottage in the middle of a wood! The house was totally remote, down a single track with no street lights. Secluded and absolutely spooky. It was like a scene straight out of Hansel and Gretel!​

​As I got out of the car, an owl hooted and a fox screamed in the darkness. A horror writer couldn’t have painted the scene with more foreboding. As it turned out, the atmosphere was perfect for what was about to unfold.

​The lady was lovely and our session was uneventful, until we neared the end. My client was in a deep state of hypnosis, when suddenly, her eyes flew open and she turned her head slowly to look at me. The bright blue eyes I had noticed during our therapy session, had turned into black dots that stared coldly into mine. I couldn’t believe what I was seeing. But then she spoke to me. Gone was the soft gentle voice of the lady I had met earlier. Out of the petite body of this frail woman, came the deep guttural voice of an old man!

​If anyone else had described this encounter, I wouldn’t have believed them. But the transformation in front of my eyes was as real as it was shocking.

​The ‘man’ I was engaging with now, told me that his spirit was inhabiting her body. He said he liked it there and warned me to “back off” and leave them alone. I found myself entering into a bizarre conversation with this alter ‘personality’, during which he threatened to kill me if I interfered or ‘exorcised’ him. Needless to say, I left him exactly where he was!

​On bringing my client back from her hypnosis session, it became apparent that she was blissfully unaware of the presence of her dark companion. I chose not to enlighten her, but left as quickly as I could.

​In speaking with colleagues to try to rationalise what had happened I found that others had encountered similar ‘personalities’ but none as malevolent as the one I had the misfortune to meet that night.

I can’t speak for all writers, but for me ideas spring from a central question, which is – “What if?”

I found myself replaying that hypnosis session and asking…”what if an alter ego appeared during therapy like that and threatened to commit murder now that he was ’free’”?

What if a series of murders began – replicating exactly what the alterpersonality had promised to do? There had only been two people in the room that night. Only two people who could know what was said…what if one of those people became his first victim? The therapist would be the only one left…she would have to work out how that could happen.

It would be the ultimate “locked room” mystery, but it would be a locked mind instead and the therapist would have to find the key to explain it.

And that’s how it all began…

What a chilling encounter! Isn’t it fascinating to hear how an author takes an experience such as this and is able to fashion a story full of tension that gives a new dimension and twist to such an infamous real-life tale?

The opening of the book is really good, a mini story in itself, it’s tense and brings the reader right up to speed on the dynamics of several characters in the book, it sets the scene and gives background for the main story.  This is a well paced, well written book which I very much enjoyed and would certainly recommend. I look forward to reading more from the fine pen of Lesley McEvoy.

Many thanks to Heather at Bloodhound Books for the invitation to join this wonderful Blog Blitz and for an eCopy of The Murder Mile by Lesley McEvoy. Like to see more about this terrific book then why not check out The Murder Mile Blog Blitz Tour…. 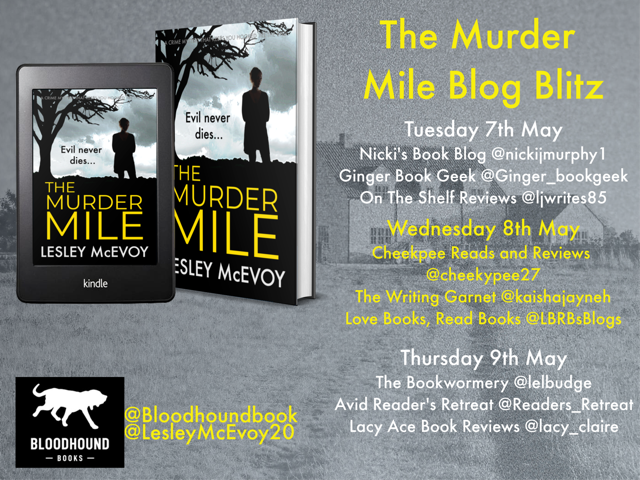 Lesley McEvoy was born and bred in Yorkshire and has had a passion for writing in one form or another all her life. The writing took a backseat as Lesley developed her career as a Behavioural Analyst and Psychotherapist – setting up her own Consultancy business and therapy practice. She has written and presented extensively around the world for over 25 years specialising in behavioural and attitudinal management, with a wide variety of organisations. The corporate world provided unexpected sources of writing material when, as Lesley said – she found more psychopaths in business than in prison! Lesley’s work in some of the UK’s toughest prisons was where she met people whose lives had been characterised by drugs and violence and whose experiences have informed the themes she now writes about. Deciding in 2017 to concentrate on her writing again, Lesley produced her debut novel, due to be published by Bloodhound Books in May 2019. These days she lives in Cheshire with her partner but still manages to lure her two grown up sons across the Pennines with her other passion – cooking family feasts.