A Testament to Murder by Vivian Conroy

Suspenseful from the first page to the last…

A dying billionaire. Nine would-be heirs. But only one will take the prize…

At the lush Villa Calypso on the French Riviera, a dying billionaire launches a devious plan: at midnight each day he appoints a new heir to his vast fortune. If he dies within 24 hours, that person takes it all. If not, their chance is gone forever.

Yet these are no ordinary beneficiaries, these men who crossed him, women who deceived him, and distant relations intent on reclaiming the family fortune. All are determined to lend death a hand and outwit their rivals in pursuit of the prize.

As tensions mount with every passing second, retired Scotland Yard investigator Jasper must stay two steps ahead of every player if he hopes to prevent the billionaire’s devious game from becoming a testament to murder…

“Never do anything yourself that others can do for you.” (Agatha Christie, The Labours of Hercules)

Malcolm Bryce-Rutherford brings together nine potential heirs to his vast fortune explaining he is ill, does not have long to live and informs them of his plan on how to determine who will inherit everything. Each one of the nine will have 24 hours as his heir and, should he die on that day, that person will inherit his entire fortune.

Vivian Conroy draws outrageously wonderful characters from Malcolm’s lily-livered nephew Hugh, his conniving wife Patty to his telltale of a former secretary Theodora. Not to mention Cecily, Malcolm’s former wife, her husband Howard and son Kenneth. None of them particularly like each other in some cases they downright dislike each other so there is no love lost amongst the potential heirs. The scene is set for a rip-roaring tale of mayhem and murder.

We are introduced to each of these individuals, none are particularly likeable but would one of them murder for for such an inheritance? Will they risk being the accused – for who is most likely to kill Malcolm on a given day other than the one who will inherit? However, they are not to be told whose name is on the Will on each day. So will alliances be made amongst this motley bunch? There are plenty of secrets amongst our characters will that be their downfall? Can someone be manipulated into murdering Malcolm?

“The game is afoot!” (The phrase comes from Shakespeare’s King Henry IV Part I, 1597: “Before the game is afoot, thou still let’st slip.” It is also a phrase used by Sherlock Holmes when pursuing a lead in a case.)

As the story unfolds we come to know a more of how our possible heirs think with regard to how they are going to get themselves into prime position to inherit.

“Oh what a tangled web we weave” (Sir Walter Scott, from his 1808 poem Marmion.)

Kenneth and Anna, two of the potential heirs, go out together on a boat but something happens and the boat overturns. Enter ex-Inspector Jasper who discovers Kenneth barely alive, and seemingly traumatised, washed up on the beach. Anna has survived as well, having swum ashore.

Deception! – lot’s of secrets, lot’s of manipulation makes for a story full of twists and turns.

Greed! – who is lying, who is telling the truth?

Jasper tries to persuade Malcolm to stop his inheritance plan there is too much is at risk.

“Everything must be taken into account. If the fact will not fit the theory—let the theory go.”  (Agatha Christie, The Mysterious Affair at Styles)

And then a body is found! Jasper agrees to help the French police investigation. Malcolm is persuaded to suspend his plan but even so another body is discovered. Jasper revisits all the evidence. Two deaths and a number of strange incidents – What is happening? Who is really responsible?

Will Jasper work out the truth? Will you, reader, put the clues together?

This delightfully constructed mystery will keep you guessing to the end when, even if you think you got it, there is still a final twist and a little something more to ponder!

Jasper (ex Inspector Jasper of Scotland Yard), now living in France, will no doubt become a firm favourite for those who enjoy a twisty plot to the mystery books that they read. Vivian Conroy conjures up just such a plot in this splendid story set in the glorious surroundings of a French villa.

With thanks to Ellie at Canelo for the Blog Tour invite and to Canelo via NetGalley for an eCopy of A Testment to Murder. These are purely my own thoughts, for which I have received no payment.

Thanks to Canelo for the invitation and an eCopy of “A Testament to Murder” for review.

Here’s the rest of this terrific blitz, why not take a look… 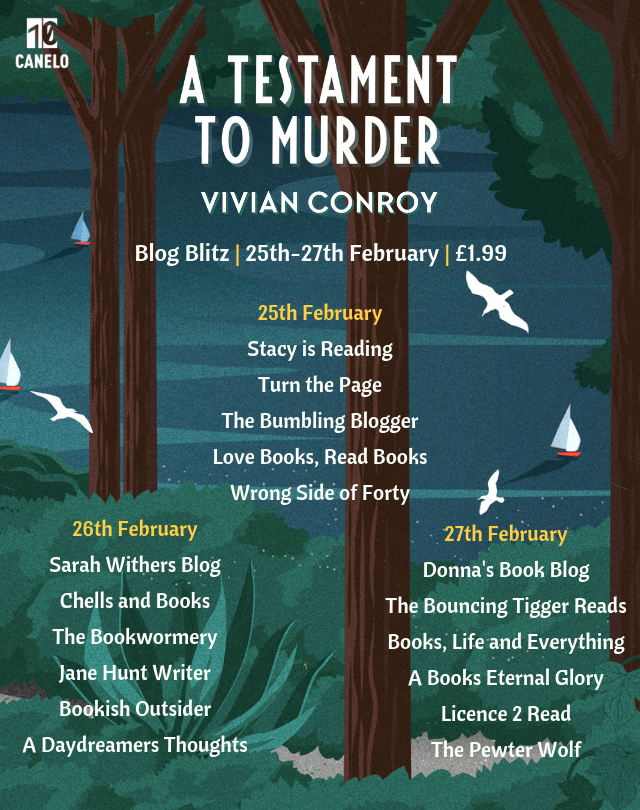 Author: Armed with cheese and chocolate, Vivian Conroy sits down to create the aspirational settings, characters with secrets up their sleeves, and clever plots which took several of her mysteries to #1 bestseller in multiple categories on Amazon US and Canada. Away from the keyboard, Vivian likes to hike (especially in the Swiss mountains), hunt for the perfect cheesecake and experience the joy in every-day life, be it a fiery sunset, a gorgeous full moon or that errant butterfly descending on the windowsill.