Death in Paris by Emilia Bernhard

The only thing chillier than a Parisian winter is cold-blooded murder. 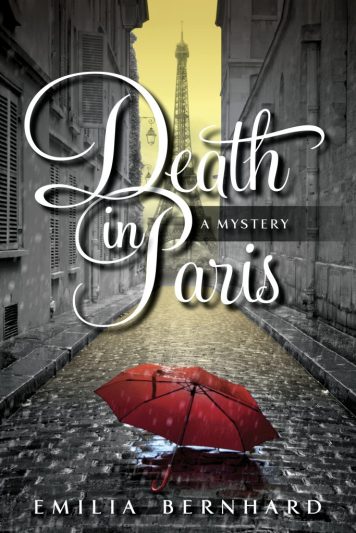 The start of a delightful new cozy mystery series in which two American women are drawn into solving a series of crimes set in each Parisian arrondissement.

When French financier Edgar Bowen drowns in a bowl of soup, his former girlfriend, American Rachel Levis, is alarmed by the unnatural death. Who dies eating a nice vichyssoise? But when she overhears a mourner at his funeral describing the circumstances of his death, something sounds even stranger: a bottle of rosé was on the dining table when he died. The only problem: Edgar loathed rosé. If he wasn’t drinking it, who was?

After the police rule the death accidental, Rachel knows it’s up to her and her best friend Magda to investigate. As the two Americans immerse themselves in Edgar’s upper-class world, the list of suspects grows: Could it have been his son, who inherited his money and lavish apartment? His icy ex-wife? His greedy new girlfriend? His impoverished personal assistant?

But when the suspects start dropping like flies, Rachel and Magda realize the murderer is tying up loose ends. It’ll be up to two amateur sleuths to solve their first case before the murderer decides they’re next…

Two ex-pat Americans – Rachel and Magda – decide to look into the death of an ‘old beau’ of Rachels who has supposedly died from drowning in a bowl of soup. Apart from the rather unusual death the only reason Rachel was sure this had to be murder was a bottle of rosé wine, something Edgar would never drink, on the dining table.

The two women take their sleuthing very seriously but are new and really rely on various fiction and non-fiction TV programmes, with a little internet help thrown in, to guide them along their way.

This is the first of a series of books which will be based in Paris here a murder – or is it? -committed in the first arrondissement.* Everyone, even the police, are content that whilst it was a tragic death there was no foul play. Rachel, however is convinced that it was murder and is determined to find out what happened and bring the murderer to account.

What a charming modern-day ‘cosy’ mystery murder. We follow the two women as they ponder what might have actually occurred, investigate various suspects and try to find the evidence that would convince the police that they are right.

We walk with them, we ride the metro and learn a little of Paris and the people of Paris which is wonderful. I have only been to Paris once, many years ago, but I loved having it as a setting. A setting which certainly added to the enjoyment of this book. We also become truly engaged with the two lead characters and their quest. It will be a pleasure to read of more of their escapades in future books.

Nor are they the only characters to enjoy there are several suspects, Rachel’s partner Alan, the solicitor Benoît, Kiki and more. They are nicely presented, believable and well crafted. Mind you one or two of the minor characters were drawn in, it seemed to me, a somewhat tongue-in-cheek manner. Indeed the story is not without amusement, it is a lovely, lighthearted story in the sense that it is in no way gory. Nevertheless it does have some tense moments, there are more deaths and the pace picks up as we come towards the conclusion of this charming story.

All in all a book which will engage, allowing the reader to immerse themselves for a few hours in a well plotted, enjoyable whodunnit, or should that be who-didn’t-do-it, and allow this cosy mystery to envelop you.

*The city of Paris itself is officially divided into 20 districts called arrondissements, numbered from 1 to 20 in a clockwise spiral from the centre of the city (which is known as Kilometre Zero and is located at the front of Notre Dame). If you would like to view Paris on a map and see them for yourself take a look Parisnet.com

With thanks to David Haviland of Thistle Publishing for an eBook of Death in Paris. All thoughts are my own, I have received no payment for reviewing this book.

Emilia Bernhard was born in Boston, Massachusetts in 1968. She got a B.A. from the University of Iowa, an M.A. from Boston University, and a Ph.D. from Brandeis University. A keen mover, she has lived in Philadelphia, Pennsylvania; Iowa City, Iowa; London, England; Boston, Massachusetts; Fayetteville, Arkansas, Cambridge, England, and Exeter, England. She currently lives in Bristol, also in England. She is a passionate lover of cats and baked goods. Although she has been writing all her life, Death in Paris is Bernhard’s first published novel, and the first in the continuing Death in Paris series. The series’ two detectives, Rachel Levis and Magda Stevens, are based in part on her and her best friend. In her other capacity, she works at the University of Exeter in Exeter, England, teaching Nineteenth-Century British Literature and Academic Writing.