The Choice by Edith Eger

Posted on August 17, 2018 by lovebooksreadbooks 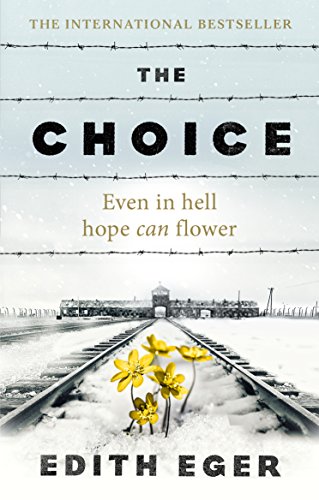 In 1944, sixteen-year-old ballerina Edith Eger was sent to Auschwitz. Separated from her parents on arrival, she endures unimaginable experiences, including being made to dance for the infamous Josef Mengele. When the camp is finally liberated, she is pulled from a pile of bodies, barely alive.

The horrors of the Holocaust didn’t break Edith. In fact, they helped her learn to live again with a life-affirming strength and a truly remarkable resilience.

The Choice is her unforgettable story. It shows that hope can flower in the most unlikely places.

This biography/memoir of Edith Eger is an amazing recollection of what happened to her as a teenager when Hitlers’ plan to kill millions of Jews, and others, before and during the Second World War reached Hungary.  What happened to Edith and her family, and many millions of Jews, was horrific. Murder planned and executed on a huge scale that we now refer to as the Holocaust.

This is not always easy reading and yet it is an uplifting story of one woman who survived and went on to help so many others suffering from various traumas.

The book tells of her time in Auschwitz, how she was found and what she did with her life afterwards. Meeting Bela, moving to the US, her family, working, studying and ultimately freeing herself – and others – in order to live fulfilling and happy lives.

This is an important message – of hope, of forgiveness, of choice – not condoning what happened to her or to those she now helps but taking back your life by understanding that you have choice even in the most appalling of situations in order to keep yourself….. you.

It is wonderful to read how Edith took what had happened and used it to help so many other people who have suffered and still are suffering. The Choice is an amazing book about an amazing woman and I strongly recommend reading it.

Find Edith on Facebook, there’s a look at the bottom of the page, to see more of what she thinks and does.

With thanks to Penguin Random House UK, Ebury Publishing via NetGalley for an ebook of The Choice in return for an honest review. I have not received any payment in relation to my review.

A native of Hungary, Edith Eger was a teenager in 1944 when she and her family were sent to Auschwitz during the Second World War. Despite overwhelming odds, Edith survived the Holocaust and moved with her husband to the United States. Having worked in a factory whilst raising her young family, she went on to graduate with a PhD from the University of Texas and became an eminent psychologist. Today, she maintains a busy clinical practice and lectures around the world.