#BlogTour: If He Wakes by Zoe Lea #Spotlight #Review

Book Blurb: You can always trust your best friend… can’t you?

When Rachel discovers a Twitter message arranging a romantic liaison she assumes her husband is having an affair, and follows him. What she witnesses is so much worse: a hit and run using his car.

Meanwhile, Rachel’s friend and business partner Suzie is increasingly worried about her fiance, who’s not been in touch for days. When Suzie learns of huge debts racked up in her name she fears he has run out on her, but then the threatening calls start and she thinks something terrible has happened.

Rachel and Suzie are both about to learn shocking things about the men they love, worse than they could ever imagine… Can their friendship survive?

‘A tense, pulse-quickening tale. If you read the first chapter, you can’t help but read the second. I flew through this perfect summer read of best friends in turmoil in one feverish session.’ Paula Daly

Two women, who once were friends in school, meet again and decide to start a business together. Rachel has a catering company, Susie is a photographer it seems an ideal pairing.

Rachel is married to Phil they have two girls – Jessica and Katie. Susie and Adam have a photography shop together, they’re engaged and getting married in about six months.

Suzie is expecting Adam back from one of his photography jobs but the bank wants her, she’s being threatened by some man called Mark and she can’t get hold of Adam…

Rachel is following up on that message she’s come to a hotel on the outskirts of Chester but she see’s a hit an run, it’s Phil’s car, and life starts to spiral out of shape…

Alternating between these two women’s stories we are kept wondering, guessing as to what is going on. There is so much deceit and lying but that is just the beginning. These two womens lives are no longer what they thought they would be and the terrible reasons emerge and it’s more appalling than you can image. As you read the awful truth emerges.

This is a heart-wrenching story, sensitively handled by this debut writer. The two main characters – Suzie and Rachel – whilst you may not love them both are well drawn. Suzie is feisty, determined, capable and strong; she has a good sense of wrong and right. Rachel is a bit full of herself, self-obsessed and ambitious; she does love her family and would do anything for them.

From the start this book draws you in, keeps you there and just when you think it’s mapped out you’re delivered a powerful twist and then once again you’re captivated until the end. 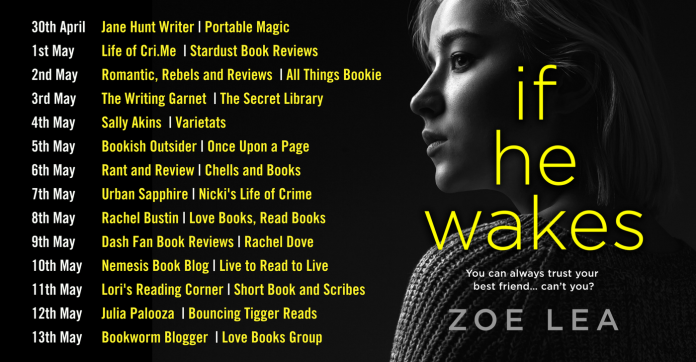 With thanks to Ellie at Canelo for organising the #IfHeWakes Blog Tour.

Zoe Lea lives in the Lake District with her husband, their two children, three dogs and peregrine falcons. She has previously worked as a teacher, photographer and freelance journalist and is a writer in the day and a reader by night. If He Wakes is her debut novel.