Whistle in the Dark by Emma Healey

Posted on May 1, 2018 by lovebooksreadbooks

After the bestselling, Costa First Novel award-winning Elizabeth is Missing comes Whistle in the Dark…

How do you rescue someone who has already been found? 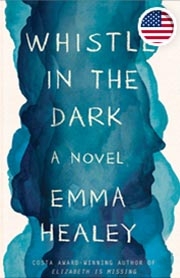 Jen’s 15-year-old daughter goes missing for four agonizing days. When Lana is found, unharmed, in the middle of the desolate countryside, everyone thinks the worst is over. But Lana refuses to tell anyone what happened, and the police draw a blank. The once-happy, loving family return to London, where things start to fall apart. Lana begins acting strangely- refusing to go to school, and sleeping with the light on.

With her daughter increasingly becoming a stranger, Jen is sure the answer lies in those four missing days. But will Lana ever reveal what happened?

I read Emma Healey’s ‘Elizabeth is Missing’ in 2015 when it came out in paperback and loved it. So when I got her second book ‘Whistle in the Dark’ from Viking via NetGalley I was delighted – thanks to them both.

’Whistle in the Dark’ is a well written, unsentimental view of a family whose 15 year old, Lana, suffers from depression. Written from the mother, Jen’s point of view. It starts with Jen and Lana on a painting break together and then Lana goes missing. Four days later she is found but won’t talk about what happened, saying she doesn’t remember. Jen, along with husband Hugh, was frantic and needs to know what happened. Jen worries that something awful happened and there will be terrible consequences, she lives like she is walking on egg shells and yet cannot stop asking questions. Hugh is less confrontational. Meg, the older daughter, informs her parents that she is pregnant and has broken up with her partner.

The mystery surrounding Lana’s disappearance is something Jen finds impossible to put aside, Hugh thinks Lana will tell them – eventually. Jen picks away at it, snooping around Lana’s social media, asking questions, wondering what happened. The police, since Lana insisted she had just been lost, have no reason to further investigate. Lana insists she cannot remember, that she was just lost. Jen cannot accept a void, she needs to know. Lana needs space, Jen needs answers.  The ending brings a bittersweet explanation and possibilities- what more can you ask for?

Emma Healy writes about those areas of a life that can be hard for us to read about but so convincingly that you feel there, in the moment and it is so real that it can become a little overwhelming. That – that small moment that may give just a peek, just a tiny insight into what it is like to be caught up in a family that has as part of it someone who suffers from depression and how it might effect that person and those around them. That is why Emma Healey is such a good writer.

Winner of the 2014 Costa first novel award for Elizabeth is Missing, Emma Healey is one of the UK’s finest new writing talents.

Emma Healey  former bookseller, grew up in London where she went to art college and completed her first degree in bookbinding. She then worked for two libraries, two bookshops, two art galleries and two universities, and was busily pursuing a career in the art world before writing overtook everything. She moved to Norwich in 2010 to study for the MA in Creative Writing at UEA and never moved back again. Elizabeth is Missing, her first novel, was a Sunday Times Bestseller, won the Costa First Novel Award 2014 and was shortlisted for the National Book Awards Popular Fiction Book of the Year