The Good Daughter by Karin Slaughter 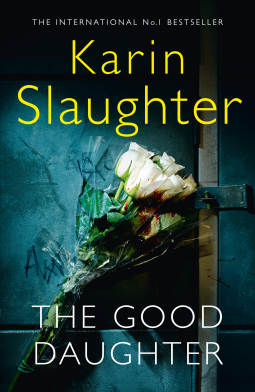 I would like to thank Harpercollins via NetGalley for a free copy of this book to review. Nevertheless, this review is fully my own thoughts and comments.

Gamma the mother of two girls, Charlie and Sam, is at home when two gunmen enter their house. A house that they have not long lived in since their home was burnt down, no one had been home but everything else had been lost. The girls are in the house too. Their father, a lawyer, is at work. The next few hours were to tragically, horrifically change their lives.

Twenty eight years later another tragic event happens. Two people killed in a school shooting one is the principal, the other a child Lucy Alexander.  This was a middle school, Lucy was eight years old. Charlie was at the school to see one of the teachers when the shooting takes place. They hear the shots, then a women screaming for help. The teacher calls it in as Charlie runs toward the scream, the shots. Charlie and Huck reach the hallway finding the dead headmaster, the screaming woman holding Lucy and Kelly Wilson.  Kelly is sitting against a wall holding a gun.

Review of The Good Daughter

Karin Slaughter so well known for her Georgia and Will Trent series has recently written some stand alone books – Cop Town and Pretty Girls and now The Good Daughter.

We read about what happened to both sisters, we read about how this leads to their estrangement, how twenty eight years later it is still impacting upon them and then how out of the second tragedy they are thrown back together and maybe how they can start truly come to terms with everything that happened. Their father has taken on the case of Kelly Wilson but then gets stabbed his life in the balance.  What will happen to Kelly now? Will the sisters be able to unravel what actually happened at the school? Or will it weigh them down even more and maybe be the last straw?

There are some terrific characters besides the sisters – Gamma, Rusty, Lenore, Ben even those with cameo roles such as the Judge and Jack.

As the stories unfold, that of the school shooting and those of Charlie and Sam from 28 years previously, Karin Slaughter weaves them into a wonderful whole. It is not an easy read at times, no surprise to anyone who has read other books by this author, but it is gripping, very well written and a captivating book. One that will live long in the memory. She writes of people who are very real, in situations that are appalling real with humanity, heart and grit. This book is well worth reading, highly recommended and is, perhaps, her best yet.

2 Comments on “The Good Daughter by Karin Slaughter”