“We must pay serious attention to the work of Ave Barrera.” — Cristina Rivera Garza, author of No One Will See Me Cry and Winner of the Mexico National Novel Prize

An intimate and funny portrait of contemporary Mexico by one of the country’s most exciting writers. THE FORGERY, written by the award-winning Ave Barrera, is a magnificent and playful caper about identity, art, and friendship.

A man contemplating jumping from the top of a building. He is in pain. How did he get to this moment?

Immediately the story grabs you with a great opening.

Travelling back in time we follow José Burgos and his failed attempt to stop being a copyist indeed a forger of paintings to become his true artist self. Then he meets Horacio Romero and a deal is struck.

Another piece of art to copy in unusual circumstances we follow what happens to José from hope to tragedy, through strange happenings to a realisation. And as more of the story unfolds we move on to what then happens.

This story is about art crime, art obsession it has secrets, death, murder. It is also about friendship it may be fleeting, unreal, casual but also deep and true. We have great characters in José and Horacio but also the twins, Isobel and Socrates. If you love your crime wrapped up in hallucinations, with some dark humour and an undercurrent of threats and fear then this is for you.

There is such a lot in this novel which runs to 173 pages. You are taken on a roller coaster of what happens to José and yet there is time, space given over to wonderful passages about paint, painting and art as there is to pain. It paints a picture of Guadalajara of rich and poor, of haves and have nots but it doesn’t dwell. It is descriptive, visceral and totally immersive.

I was delighted to be asked by Jessica Putt, MidasPR to join this incredible BlogTour – thank you.

Enormous thanks to Charco Press for a copy of The Forgery by Ave Barrera for review.

If it wasn’t for the translators and the publishers this is a story I (and many others) would not even have been able to read so thanks for to Robyn Myers, Ellen Jones (translators) and Charco Press.

Like to read more about The Forgery? Then take a look at all the other wonderful blogs taking part in the BlogTour.

Another of my #20Booksofsummer is finished. You can check out my list here. Cathy from 746Books is the mastermind and host behind this annual event do take a look at her excellent blog.

Translated from the original Spanish by pioneering publisher, Charco Press, and accomplished translators, Ellen Jones and Robin Myers, THE FORGERY was originally published in Mexico to critical acclaim in 2016.

Shining a light on the rich array of fiction currently coming out of Latin America, Charco Press brings the region’s most exciting contemporary writers to new readers in the English-speaking world, publishing books that are entertaining, engaging and thought provoking. Charco Press meticulously seeks out the perfect translators to bring their authors’ work to life for English readers, often championing new and emerging translators, as well as established names.

Launched in 2017, Edinburgh-based Charco Press has already achieved international recognition, with one book longlisted and two shortlisted for the International Booker Prize, and the publishing house being named Scotland Small Press of the Year 2019 and 2021 at the Nibbies. Marking its fifth birthday in 2022, Charco Press has recently launched an English-first series, ‘Untranslated’, embracing texts by English-speaking authors linked to Latin American culture, as well as its first Spanish-language OriginalES editions.

The Forgery with Brazos Bookstore

Ave Barrera and translators Ellen Jones and Robin Myers will be discussing their book The Forgerywith Brazos Bookstore in this unique virtual event. 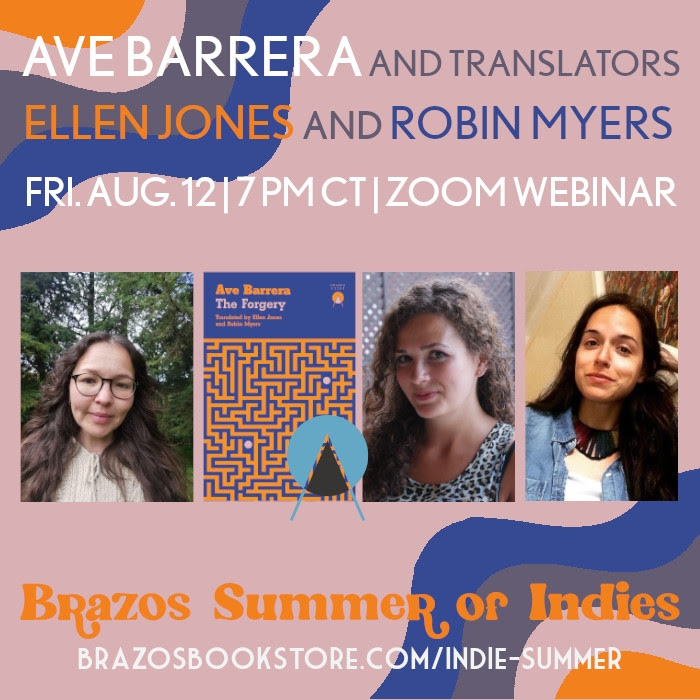 Author: Ave Barrera (Guadalajara, México, 1980) holds a Bachelor in Hispanic Literature at University of Guadalajara and for several years she was editor in Oaxaca, México. Ave has been awarded fellowships from the Fundación Carolina for a training course on publishing at the Complutense University of Madrid and the Young Creators Grant for Novel (2010 and 2014) from the Mexican National Fund for Culture and the Arts (FONCA).

Ave has worked as copywriter for e-media and once as a ghostwriter. She also writes short stories and just published the illustrated children book Una noche en el laberinto (A Night in a Labyrinth, Edebé 2014). She was recipient of the Sergio Galindo Award from the Veracruz University with her first novel Puertas demasiado pequeñas (A Door Too Small). She currently lives in México City and is writing a new novel: Tratado de la vida marina (A Treatise of Marine Life) with the support of FONCA. Her latest novel was published in 2019 in Mexico and Spain under the title Restauración (Restoration).

Ellen Jones is a researcher and translator based in London. She has a PhD from Queen Mary University of London and writes about multilingualism and translation in contemporary Latin American literature. Her reviews have appeared in publications including the Times Literary Supplement and The Los Angeles Review of Books, and her translations in publications includingThe Guardian and Latin American Literature Today. She has been Criticism Editor at Asymptotesince 2014.

Robin Myers is a New York-born, Mexico City-based poet and translator. Her translations have appeared or are forthcoming from the Kenyon Review, the Harvard Review, Two Lines, The Offing, Waxwing, Beloit Poetry Journal, Asymptote, the Los Angeles Review of Books, Tupelo Quarterly, and Inventory. In 2009, she was named a fellow of the American Literary Translators Association (ALTA); in 2014, she was awarded a residency at the Banff Literary Translation Centre (BILTC); and in 2017, and she was selected to participate in the feminist translation colloquium A-Fest. Recent book-length translations include Lyric Poetry Is Dead by Ezequiel Zaidenwerg (Cardboard House Press), Animals at the End of the World by Gloria Susana Esquivel (University of Texas Press), and Cars on Fire by Mónica Ramón Ríos (Open Letter Books).