Posted on January 8, 2020 by Tauricrafter

This long-awaited memoir from one of Britain’s best-loved celebrities – a writer, broadcaster, activist, comic on stage, screen and radio for nearly forty years, presenter of QI and Great British Bake Off star – is an autobiography with a difference: as only Sandi Toksvig can tell it.

‘Between the Stops is a sort of a memoir, my sort. It’s about a bus trip really, because it’s my view from the Number 12 bus (mostly top deck, the seat at the front on the right), a double-decker that plies its way from Dulwich, in South East London, where I was living, to where I sometimes work – at the BBC, in the heart of the capital. It’s not a sensible way to write a memoir at all, probably, but it’s the way things pop into your head as you travel, so it’s my way’.

From London facts including where to find the blue plaque for Una Marson, ‘The first black woman programme maker at the BBC’, to discovering the best Spanish coffee under Southwark’s railway arches; from a brief history of lady gangsters at Elephant and Castle to memories of climbing Mount Sinai and, at the request of a fellow traveller, reading aloud the Ten Commandments; from the story behind Pissarro’s painting of Dulwich Station to performing in Footlights with Emma Thompson; from painful memoires of being sent to Coventry while at a British boarding school to thinking about how Wombells Travelling Circus of 1864 haunts Peckham Rye; from anecdotes about meeting Prince Charles, Monica Lewinsky and Grayson Perry to Bake-Off antics; from stories of a real and lasting friendship with John McCarthy to the importance of family and the daunting navigation of the Zambezi River in her father’s canoe, this Sandi Toksvig-style memoir is, as one would expect and hope, packed full of surprises.

A funny and moving trip through memories, musings and the many delights on the Number 12 route, Between the Stops is also an inspiration to us all to get off our phones, look up and to talk to each other because as Sandi says: ‘some of the greatest trips lie on our own doorstep’.

I lived and worked in London for over twenty years and, whilst my stopping ground was mainly west London, I worked for the BBC for over half those years several of which were spent in The Langham, 33 Cavendish Square and Broadcasting House. I would often travel by tube but loved travelling on the red buses which traverse the Capital and provide such a wonderful service to its citizens. So when I saw Between the Stops by Sandi Toksvig offered on NetGalley it felt like I was being offered an opportunity to enjoy another wonderful bus journey through part of this amazing place.

We hop on the No.12 and join Sandi as she travels from Dulwich towards central London. We are then treated to a eclectic meandering of the body and mind. We are treated to snippets of Sandi’s life, told fascinating facts of London history and hear about some of Sandi’s experiences whilst travelling the No.12 route.

We are sitting with Sandi as she travels, enjoying the view from the top, front, right hand side seat. We walk with her as she hops off the bus to take refreshment along the way and enjoy stories of her life as the memories pop into her mind. As we travel along we learn some wonderful facts about the areas we travel through, some of the people (almost solely men) who have plaques or roads, buildings and areas named after them. We hear about Sandi’s sadnesses – for example, the lack of women’s history being reflected on the journey; her joys – family and friends, her work – from No 73 to Bake Off and QI (Sandi did what so many thought would be impossible by following Stephen Fry and is so right as the host of this show); her politics – ultimately co-founding the WEP; her wider travels and her life.

This is a terrific book. I read it from start to finish but could easily see others reading it a bit at a time. Using it almost like a travel guide – whether whilst actually riding the route or virtually – perhaps even adding to the array of interesting history. Or, even beginning to bring together that missing history of local women. That would be something to see and read about, wouldn’t it?

The book is not only full of information it is full of emotion – I went to see Sandi earlier this year in Nottingham – and felt this was just the way she is. She sees the humour in life but also the difficulties, experienced or shared, and has a thirst for knowledge and justice. I thoroughly enjoyed her show. Her book is as enjoyable. If you get the chance do go and see Sandi’s show ‘The National Trevor Tour‘ . “After a sell-out in Spring 2019 and due to popular demand” (TRCH) it’s touring again in 2020. Most importantly do, of course, read this wonderful book.

With thanks to Little Brown Book Group UK, Virago Press, via NetGalley for an eCopy of Between the Stops by Sandi Toksvig. All thoughts are my own, I have not received any payment for this review. 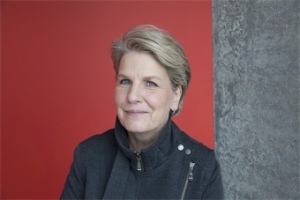 Author: Sandi Toksvig went into theatre as a writer and performer after graduating from Cambridge. Well known for her television and radio work as a presenter, writer and actor, she has written more than twenty books for children and adults. She also writes for theatre and television: her film The Man starred Stephen Fry and Zoe Wanamaker and her play Bully Boy starring Anthony Andrews opened the St James Theatre, London in 2012. She was Chancellor of Portsmouth University from 2012 to 2017. In 2016 Sandi took over as chair on QI, and in 2017 she started presenting The Great British Bake Off. She lives in London and Kent.

a directory of independent bookshops and publishers