The Bone Keeper by Luce Veste 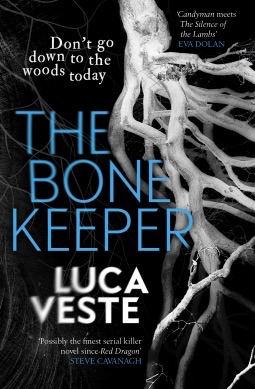 What if the figure that haunted your nightmares as child, the myth of the man in the woods, was real?

Twenty years ago, four teenagers went exploring in the local woods, trying to find to the supposed home of The Bone Keeper. Only three returned.

Now, a woman is found wandering the streets of Liverpool, horrifically injured, claiming to have fled the Bone Keeper. Investigating officer DC Louise Henderson must convince sceptical colleagues that this urban myth might be flesh and blood. But when a body is unearthed in the woodland the woman has fled from, the case takes on a much darker tone.

The disappeared have been found. And their killer is watching every move the police make.

I had heard good things about this author and so was delighted to get the opportunity to read this e-ARC from Simon and Schuster UK. This is the second piece I have read by Luca Veste, the first being a short story. The plot seemed to be right up my alley and an interesting take from Luca Veste – a killer on the loose bringing to life an urban myth of the locality.  Set in Liverpool a city I know which certainly added interest for me.

It opens with the disappearance of Matty who, along with three other children, had gone into woodland to find where The Bone Keeper lives. Then there’s Caroline who, years later, is found wandering the streets of Liverpool having been viscously attacked repeating The Bone Keepers rhyme.  Finally, we have Louise Henderson a Detective Constable assigned to Caroline’s case.  All good so far.

The story jumps back and forth between ‘Now’ and ‘Past’ clearly indicated but somehow it feels a bit jumbled and instead of bringing out the tension, story and characters – instead of gripping you so you didn’t want to put the book down – it made me halt, take a break before coming back. The book is pretty much told from the point of view of DC Henderson but I didn’t really find myself engaging with the character, indeed her relationship with her DS grated. This book would have been better for keeping to the detection, I understood that the author wanted to convey to us that Louise had a secret past and issues from that, indeed had done so, without the halfhearted attempt at romance which, whilst not taking over the story thank goodness, for me shouldn’t have had a place in it.

Nevertheless, there is a good story in here. There is some tension, it is a little scary and the parts of the book dealing with the actual initial attack and subsequent murders with the overtones of The Bone Keepers myth turning reality with it’s twists had potential to make this a really good book. Somehow, for me, it just didn’t quite get there. Each reader will have their own take and so I hope you enjoy it even more than I did.

With thanks to Simon and Schuster UK for providing me with an e-ARC via NetGalley for an honest opinion.

The Bone Keeper will be published 8 March 2018

a directory of independent bookshops and publishers